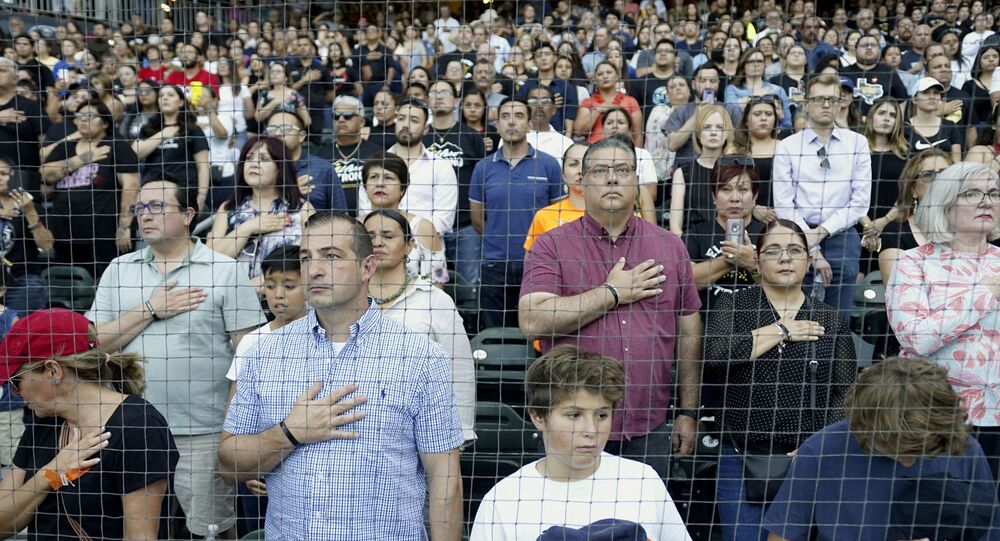 He was arrested by the Secret Service for being a “fugitive from justice”, and has an existing criminal record for theft and evading arrest, having been sentenced to eight months in prison for car theft in March this year. In 2016, he pleaded guilty and was also sentenced to 18 days in jail for stealing TVs from a Sears in Richardson, Texas.

Chris Grant, a 50-year-old main honored by President Donald for his heroism during the El Paso Walmart mass shooting in July, was arrested by the Secret Service during a 9th September visit to the White House due to an outstanding criminal warrant.

'Nobody bothered to check with us'

Grant was arrested at the White House due to an outstanding warranthttps://t.co/zCs6aNJ5PU

​Despite his release, further trouble may lie on the horizon for the luckless Grant too, as police allege his tale of heroics during the 3rd August spree killing which claimed the lives of 22 doesn’t tally with available video evidence. Grant was shot in the ribs and a kidney during the rampage, and claimed in a series of interviews he sought to spare fellow shoppers by picking up bottles and throwing them at the gunman, with at least one hitting or nearly striking him. A Gofundme campaign has raised US$16,917 on his behalf to date.

He was interviewed on CNN host Chris Cuomo in August, and gave a stirring account of his attempt to distract the shooter.

"To deter him, I started just chucking bottles, throwing bottles, random bottles at him. I'm not a baseball player, so one went this way, one went that way. And then one went right towards him and then that's when he saw me…When I got hit, it was like somebody put a hand grenade in my back and pulled the pin,” he alleged.

What a lying piece of trash. Chris Grant I hope you rot in hell!!! pic.twitter.com/fnIpAudA1o

​Trump fawned over Grant's heroics in a speech at a White House East Room ceremony 9th September, where he honored four other El Paso civilians and six police officers involved in the Dayton, Ohio, shooting a few hours later. Grant was precluded from attending due to his arrest.

“Chris grabbed — listen to this — soda bottles and anything else in front of him, and began hurling them at the gunman, distracting him from the other shoppers and causing the shooter to turn toward Chris and fire at Chris, whereby Chris suffered two serious gunshot wounds. But he is recovering well, and we wish him the best. His family is here. So please thank Chris for us, please,” the President said.

However, El Paso police spokesperson Sergeant Enrique Carrillo claims “nobody bothered to check with us”, and the force’s detectives – having reviewed “hours of video” – attest Grant’s actions don’t match his account, with his statements “inconsistent with what was revealed on video”. Whatever the truth of the matter, Grant was reportedly sedated for two days after the attack and underwent surgery.

If Grant has embroidered or distorted his account, he’s certainly not the first survivor of a horrific event to embellish and exaggerate his role therein – although at least he was actually there, unlike Alicia Esteve Head, a Spanish woman who claimed to be a survivor of the 9/11 attacks.

The WTC's most famous survivor and president of its support group, Tania Head, was later found to be a fraud: she wasn't even in NYC on 9/11

She joined the World Trade Center Survivors' Network support group, later becoming its president, and her name was regularly mentioned in media reports of the attacks. It wasn’t until 2007 that it would be revealed her story was a hoax – not only was she not in New York City on 11th September 2001, she’d never even visited the US until two years later.

The June 2017 fire in Grenfell Tower, a 24-storey block of flats in Kensington, London, claimed the lives of 72 residents in the worst UK residential blaze since the Second World War. Authorities and the public alike sought to assist those affected in any way possible – and it precipitated a veritable fraudster feeding frenzy. As of September 2019, 20 people have been convicted of fraud for claiming they lived in the tower block and/or had relatives in the building who died and had their homes destroyed.

They all received sizeable funds from the Grenfell survivor fund, and splashed the cash on on lavish holidays, expensive cars and gambling. Many were put up in lavish hotels as temporary accommodation, where they racked up enormous bills for food and other expenses. One individual who pretended to be a Grenfell victim was even found to have made over 50 fifty false claims to insurers and had also claimed to be present at the Manchester Arena bombing and London Bridge attack just weeks earlier.