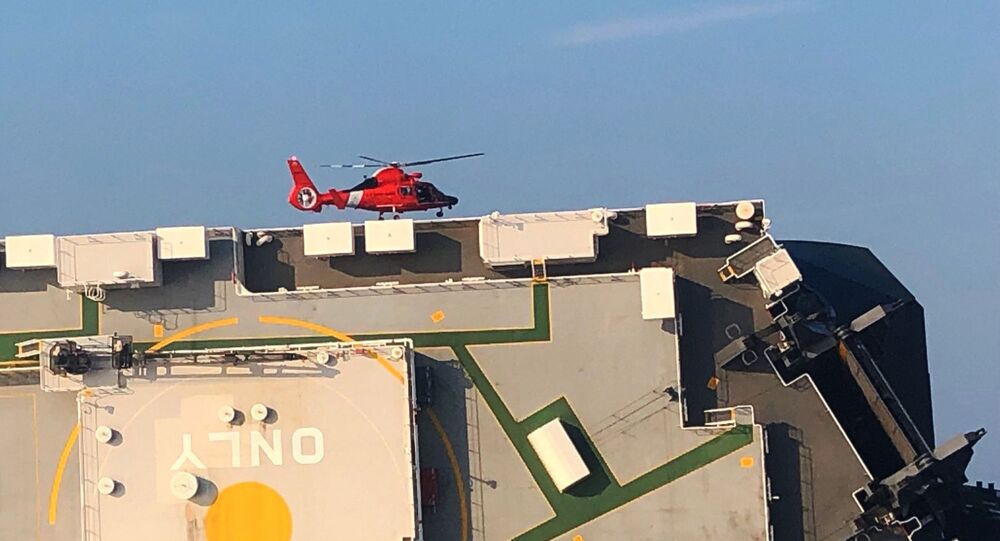 The US Coast Guard rescued the last crew member trapped inside a wrecked automobile transport ship off the Georgia coast on Monday.

Rescuers had to cut through the exposed hull of the Golden Ray, a massive cargo ship that overturned Sunday morning shortly after leaving port. The last remaining trapped crew member was rescued Monday evening after three others were rescued earlier that day. The other 20 crew members were rescued Sunday.

​Coast Guard responders told AP they had lowered supplies to the three now-rescued crew members through the hole cut in the hull. Those three were able to escape through the hole, while the fourth remained trapped behind glass in an engineering control room without access to food, water, or fresh air until he was rescued Monday evening.

The language barrier was reportedly a problem early in the rescue, as the crew is entirely South Korean. Rescuers located the crew by tapping back and forth between the two groups through the metal hull, and the ship's engineer reportedly translated between the rescuers and the trapped crew.

"They looked super happy to be out of that space," a Coast Guard spokesman told reporters at a press conference Monday afternoon. He noted they climbed down onto the rescue tugboat by themselves, but were being treated at the local medical center.

"They were subject to some pretty tough conditions" over the roughly 35 hours since the ship overturned, the spokesman said, noting that "it's a lot hotter in that ship than it was for us on the outside, and I'm sure on the outside it was probably pushing 120 or more" degrees Fahrenheit. The Coast Guard had no timeframe for an expected rescue of the fourth crew member at the time of the presser.

​The 656-food Golden Ray left ​the Port of Brunswick in St. Simons Sound, Georgia, Sunday morning with a load of 4,000 automobiles, but quickly began listing to port and eventually overturned and caught fire. The ship is located about 65 miles south of Savannah, in an area of the United States devastated just days ago by a glancing strike from Hurricane Dorian. The National Transportation Safety Review Board has launched an investigation into the shipwreck.