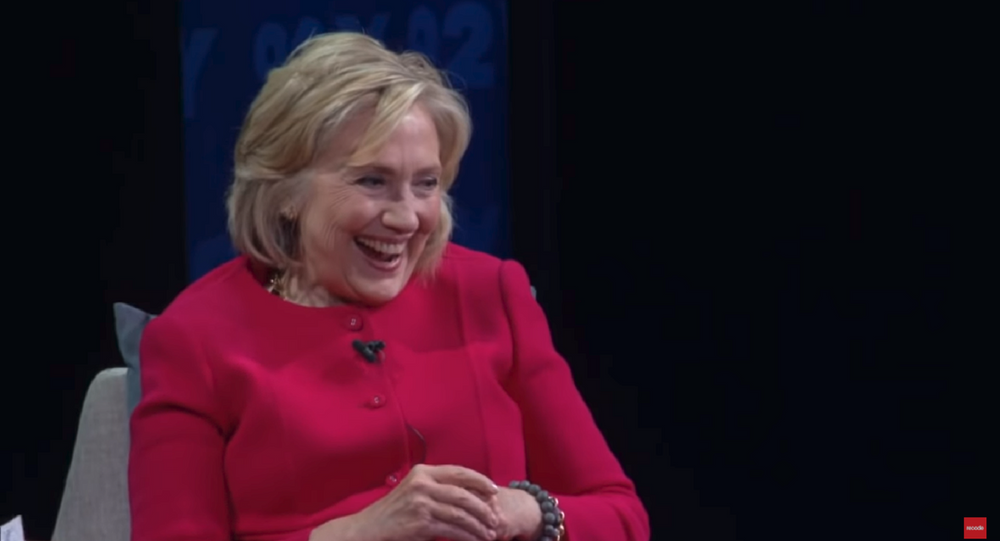 Hillary Clinton, the Democratic Party’s nominee for president in 2016, met with several potential 2020 candidates at the beginning of this year, including Sen. Elizabeth Warren.

Sen. Elizabeth Warren (D-MA) has been in contact with Hillary Clinton and speaking to her behind the scenes throughout her presidential campaign, claim sources cited by NBC News.

One source mentioned knowing of one additional call between Warren and Clinton since the start of the year, however, a person in proximity to Clinton insisted the contact merits attention and was substantial, describing the conversation between the two women as seemingly recent because it was “front of mind” for her.

Clinton has been speaking to Warren in recent months, claim the sources, adding “that has clearly not gone unnoticed, and I think she really appreciates that”.

Earlier, it had been widely reported that Hillary Clinton, who lost to Trump in 2016, met with several potential 2020 candidates at the beginning of the year, including former Colorado Gov. John Hickenlooper (D), Sen. Cory Booker (D-NJ), and Sen. Elizabeth Warren (D-MA).

There is no information regarding the actual number of conversations Warren has recently had with the failed presidential candidate, with the two publicly keeping the lid on their interaction.

“To the extent that Democratic primary voters fear a repeat scenario in 2020 — and to the extent that she’s competing with Sanders for the votes of progressives — there may be good reason for Warren to keep her distance from Clinton publicly,” NBC News reports.

The television network claims Clinton could be a valuable asset, should Warren “find herself battling for delegates and superdelegates” at next year’s Democratic National Convention in Milwaukee, Wisconsin – the same state Clinton lost in 2016.

“Hillary Clinton would absolutely have influence over a number of delegates to this convention,” Deb Kozikowski, the vice chair of the Massachusetts Democratic Party, was quoted as saying.

“It would be counterproductive for the first woman nominee of the party to not be supportive of a woman who may go over that threshold,” Kozikowski added.

Warren’s team has not commented the relationship between Clinton and Warren.

The social media’s reaction to the reports of possible behind-the-scenes interaction between the two politicians has been prompt, with many debating just how bad a move this might be for Warren:

Right, because she is just terrific at winning electionshttps://t.co/reMnMPcz2F

SO WARREN WILL LOOSE /// Report: Hillary #Clinton Speaking to Elizabeth #Warren Behind the Scenes https://t.co/BSvuOq8FuE

Can anyone imagine if she had clinton as a running mate ...... Who thinks it's a bad move for Warren ..... #ClintonBodyCount
Report: Hillary Clinton Speaking to Elizabeth Warren Behind the Scenes https://t.co/BXYKl67sft via @BreitbartNews

(null) Report: Hillary Clinton Speaking to Elizabeth Warren Behind the Scenes BIRDS OF A FEATHER FLOCK TOGETHER WARREN HAS MADE A GIANT BLUNDER AND HER NAME IS HILLARY! TRUMP WINS AGAIN https://t.co/m2zrxaEzLm

The bankruptcy Professor Elizabeth Warren was doing great until she took this picture with one of the big biggest criminals of the 20th century Hillary Clinton! So long Elizabeth looks like Joe after all!
By the time Trump is sworn in on 1/20/21 Joe will be in an old folks home!

Let’s see how many Democrat nominees go after Elizabeth Warren for her sweet new connection with the abomination that is Hillary Clinton. Joe Biden hasn’t got Obamas blessing yet!
If he remembers who Hillary is he might blast Warren and Hillary to regain some respect.