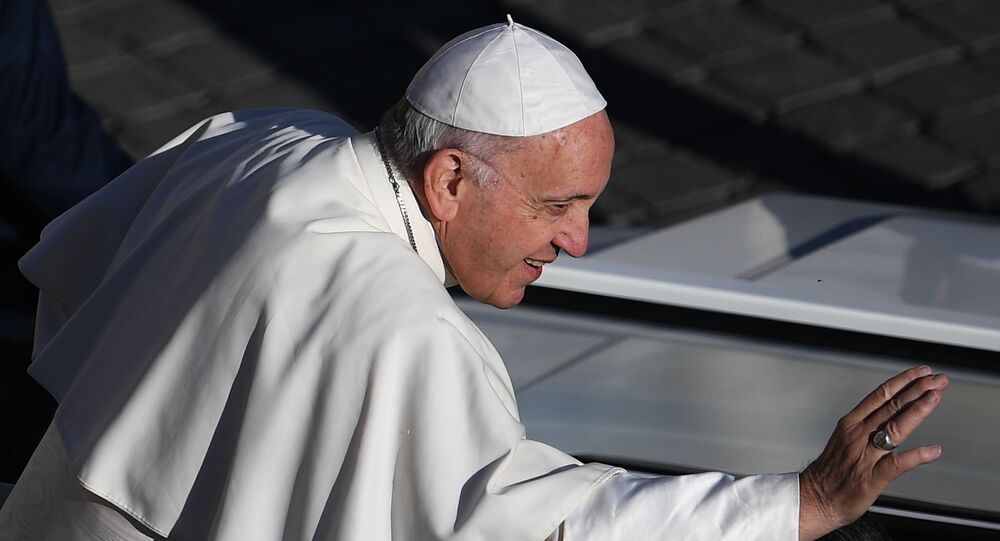 The pope is well known for his equanimity, shown in various situations, as well as for his readiness to communicate and work with all types of people, regardless of their affiliation.

During a flight to Mozambique Pope Francis has told journalists that he briefly studied the contents of a recently published book, called How America Wants to Change the Pope, devoted to an alleged attempt by the American Catholic Church to change the head of the Holy See.

"It is an honour for me to be attacked by the Americans. This [book] is a bomb", the pontiff said.

His words were later clarified by Holy See spokesman Matteo Bruni, who explained that the Pope "always considers criticism an honour", especially when it comes from "authoritative thinkers" or "an important nation".

The author of the aforementioned book claims that a scandal, initiated by the Vatican's envoy to the US, Archbishop Carlo Maria Viganò, was an attempt to force Francis to resign from his post, allegedly supported by Catholic TV network EWTN and Canadian LifeSiteNews. Archbishop Viganò namely claimed that he warned Pope Francis back in 2013, when he was elected, of sexual abuse conducted by former Cardinal Theodore McCarrick, which allegedly didn't stop the pontiff from reinstating the latter in his position.

© AP Photo / Vincenzo Pinto
Pope Francis hosts a four-day summit on preventing clergy sexual abuse, a high-stakes meeting designed to impress on Catholic bishops around the world that the problem is global and that there are consequences if they cover it up

According to the book, after the failure of the "coup", its authors turned to lobbying the conclave to prevent the election of a new pope that would adopt Pope Francis' policies and stances.

Author of the bombshell, journalist Nicolas Séneze, said that the key point of the US Catholic Church's discontent is Pope Francis' criticism of "neo-liberal American capitalism" and of the death penalty, as well as a lack of condemnation of homosexuality.