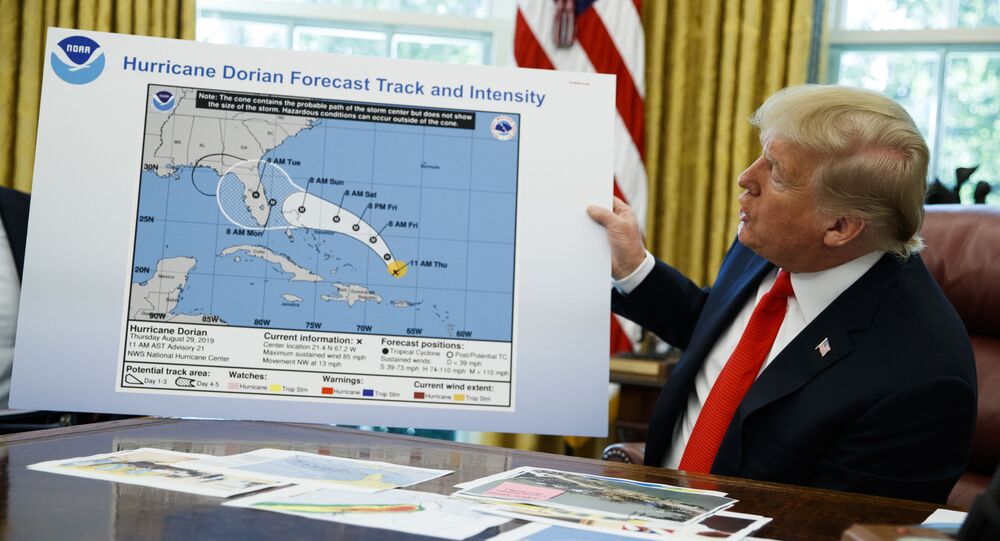 It all began even before Dorian hit the Bahamas when the US president tweeted that Alabama could be among the states hit by the storm. His claim was refuted by the National Weather Service’s Twitter account, which prompted yet another Donald Trump’s stand-off with what he described as “Fake News”.

US President Donald Trump has denied knowing his map graphic of the storm’s path during a brief update on Hurricane Dorian in the White House had a hand-drawn addition that included Alabama.

“I just know, I know Alabama was in the original forecast. They thought they would get it as a piece of it. It was supposed to go — actually we have a better map than that which is going to be presented where we had many lines going directly, many models, each line being a model, going directly through. And in all cases, Alabama was it”, he replied, when he was asked if he was aware that the picture in question had been altered.

Trump also replied that he did not know if the map was changed with his pen of choice, a Sharpie. He insisted that the hurricane “made that right turn that a lot of people didn’t expect” although there was a “95 percent probability” it would head to Alabama. He then took to Twitter to prove his point using another map with Dorian’s “originally projected path”.

“This was the originally projected path of the Hurricane in its early stages. As you can see, almost all models predicted it to go through Florida also hitting Georgia and Alabama. I accept the Fake News apologies!” Trump tweeted, challenging those who accused him of spreading false information about the storm.

13 hours later, he resumed to lambast the "Fake News" and explained why he talked about the the threat to Alabama in the first place.

....Instead it turned North and went up the coast, where it continues now. In the one model through Florida, the Great State of Alabama would have been hit or grazed. In the path it took, no. Read my FULL FEMA statement. What I said was accurate! All Fake News in order to demean!

​​The recent turn in the Alabama row came after the White House account tweeted a video of Trump showing what he described as an original chart. He was given hell on social media, after commenters and journalists spotted an addition, which doesn’t look remotely like the rest of the projection. It extends just enough to include Alabama’s coastline - a state Trump has repeatedly insisted Hurricane Dorian had endangered, even while multiple weather reporters and agencies actively refuted the claim.

One meteorologist, Forbes Science contributor Dennis Mersereau, even noted the president may have broken a federal law by delivering a false weather report. A 1948 law reads that “whoever knowingly issues or publishes any counterfeit weather forecast or warning of weather conditions falsely representing such forecast or warning to have been issued or published by the Weather Bureau, United States Signal Service, or other branch of the Government service, shall be fined under this title or imprisoned not more than ninety days, or both”.

The debates about Alabama began on 1 September when Dorian was just east of the Bahamas as Trump claimed that Alabama could be among the states hit by the storm. He also repeated the claim several more times during a presser on the White House South Lawn and a briefing for the Federal Emergency Management Agency (FEMA).

​Birmingham-based ABC affiliate WBMA-LD’s James Spann quote-tweeted the president directly with the same message, and Trump fired back, doubling down on his claim and slamming the journalist and his company for the “lightweight” reporting.