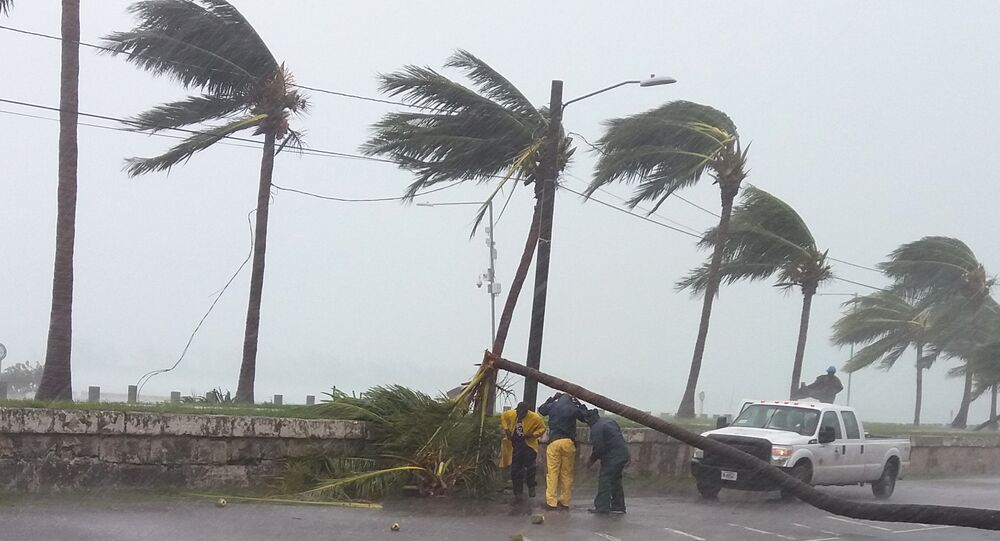 The US National Hurricane Centre (NHC) issued a warning on Saturday, saying that storm Dorian "is now moving closer to the Northwestern Bahamas", adding that the heavy rainfall expected over the affected territory.

"A prolonged period of life-threatening storm surge, devastating hurricane-force winds, and heavy rains capable of life-threatening flash floods are expected on the Abaco Islands and Grand Bahama Sunday through Monday, and a hurricane warning is in effect for these areas", the NHC said in a statement.

"Data from the NOAA Hurricane Hunters indicate that Dorian has strengthened to an extremely dangerous category 4 hurricane with maximum sustained winds near 130 mph (215 km/h). This increase in intensity will be reflected in the forecast issued at 1100 pm EDT [03:00 GMT]" the NHC said late on Friday.

10 pm. Warm & windy. Stars in the sky. I'd call it a nice night, but it's nature's deception-- like putting nice curtains on the gates to hell. #DORIAN #Bahamas pic.twitter.com/nBlSSJaFTj

US President Donald Trump has declared a state of emergency in Florida, where the hurricane is expected to make landfall as a "life-threatening storm" over the three-day US Labor Day holiday weekend, and authorized US federal agencies to provide appropriate assistance for emergency measures.

Trump also has vowed to meet top officials of the Federal Emergency Management Agency (FEMA) at their headquarters on Sunday morning to decide what steps should then be taken in dealing with the hurricane crisis.

Notably, Trump had reportedly argued at several briefings with homeland and national security officials that nuclear bombs should be dropped into the eye of hurricanes forming off the African coast to disrupt them.

Here's the latest from our 18Z #IBM MPAS run. Despite the ECMWF offshore trend over the past 24 hours, our MPAS model stalls Hurricane Dorian off the Florida coast for a few hours and slowly brings it onshore. pic.twitter.com/vm2WhPMKJB

The US state of Florida will be reportedly a critical state in the 2020 US presidential election. Trump is under fire from critics for his controversial response to Hurricane Maria, which devastated Puerto Rico, killing some 3,000 in 2017.

Meanwhile, From Florida to South and North Carolina, state and local authorities are reportedly preparing for the hurricane’s landfall, subsequent flooding and possible loss of electrical power.

Trump Declares Emergency in State of Florida Over Hurricane Dorian

Hurricane Dorian Changes Its Path, Aiming at Georgia and Carolinas