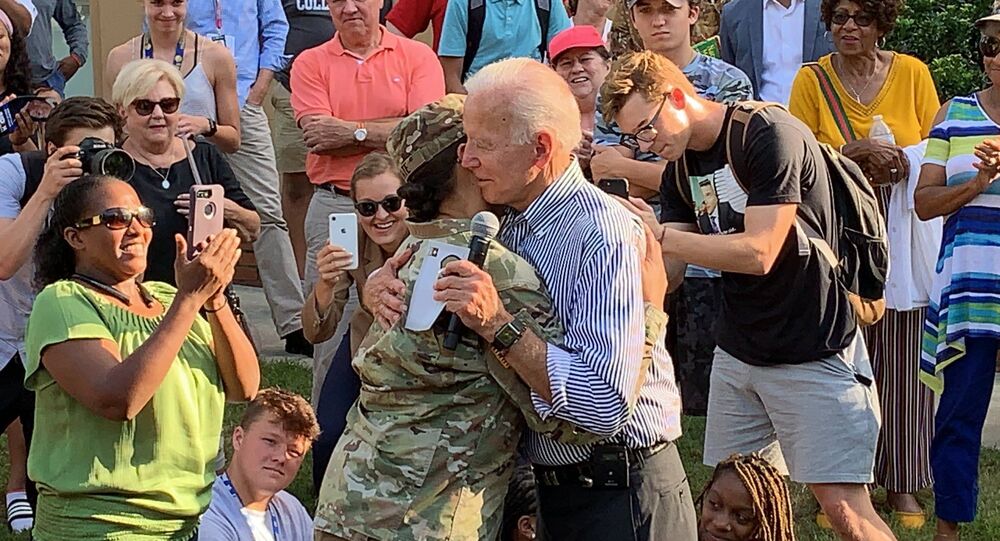 Under US Department of Defence guidelines, US service members are banned from engaging in political activities – and openly showing support for a Democratic hopeful qualifies as such, a number of social media users agreed.

A US Army major has ignited a controversy online after endorsing 2020 Democratic candidate Joe Biden at a town hall while wearing a military uniform.

In an emotional tribute to Biden — a Democratic primary front-runner — a woman who identified herself as Maj. Ginger Tate presented the former vice president with an engraved coin from her unit, which was deployed to Afghanistan in 2013, and expressed hope he would become the next president.

“I’ve been saving these coins for six years to meet you and President Obama,” she said to a round of applause at a town hall meeting in Gaffney, South Carolina on Wednesday.

“So if that I ever met you, I would give it to you,” the woman added with a crack in her voice, “and when I saw on the news that you were coming, I just had to be here. Thank you so much for your guidance.”

“I’m so honoured to have served under your administration and your leadership and I hope and pray that you will be our next president,” she concluded.

Biden went on to give her a coin he took from Afghanistan, where he has been a number of times as a senator and vice president, and the two exchanged salutes and hugged it out.

WOW: Major Ginger Tate led 130 troops in Afghanistan and just told @JoeBiden she has been waiting 6 yrs to give him this coin. "I hope and pray that you will be our next president." [Credit: Iris Earls] @CBSNews via @LacraiMitchell pic.twitter.com/gZ4Jaku1DI

This encounter – a display of emotions in politics of the sort that resonate with many people – was picked up by several mainstream media outlets. CBS reporter Caitlin Huey-Burns called it a “really powerful moment”, and MSNBC reporter Garrett Haake struck a similarly enthusiastic tone.

A really powerful moment on the campaign trail, as Major Ginger Tate gives @JoeBiden a coin from her unit when she was deployed in Afghanistan. She said she had been waiting for years to meet him and give it in person. He gave her his VP coin in return. pic.twitter.com/SPx6Vx5MoN

But the question has emerged as to whether the woman’s tribute to Biden was in line with the rules for active-duty members of the armed forces.

Although the Department of Defence does not restrict service members’ right to vote and express their opinions regarding political candidates, its guidelines (in particular Directive 1344.10) prohibit wearing military uniforms at political campaign events.

A National Guard Bureau spokesperson told Breitbart in a statement: “the National Guard is an apolitical organisation. Personnel may not engage in partisan political activities and should avoid the inferences that imply or appear to imply approval or endorsement of a political candidate, campaign or cause while in uniform.”

There has been no official confirmation whether Tate is currently on duty, but if that’s the case, she could have also run afoul of the 1939 Hatch Act, which bars soldiers from political advocacy.

Last week, Defence Secretary Mark Esper was asked in a Fox News interview whether he would ban service members from wearing hats sporting Trump’s signature MAGA slogan. He declined to express his opinion on the controversial headwear but stated that “political items should not be worn on a military uniform ever”.

A major controversy erupted during Trump’s surprise trip to Iraq in December 2018, when soldiers brought their MAGA hats for Trump to sign them.

At the time, quite a number of US news outlets, including CNN and the Washington Post, suggested that this could have been in breach of military rules. Retired top officers claimed on TV that bringing MAGA hats to the meeting was inappropriate, citing the DoD’s regulations, but the military found no policy violations.

CNN & others within the Fake News Universe were going wild about my signing MAGA hats for our military in Iraq and Germany. If these brave young people ask me to sign their hat, I will sign. Can you imagine my saying NO? We brought or gave NO hats as the Fake News first reported!