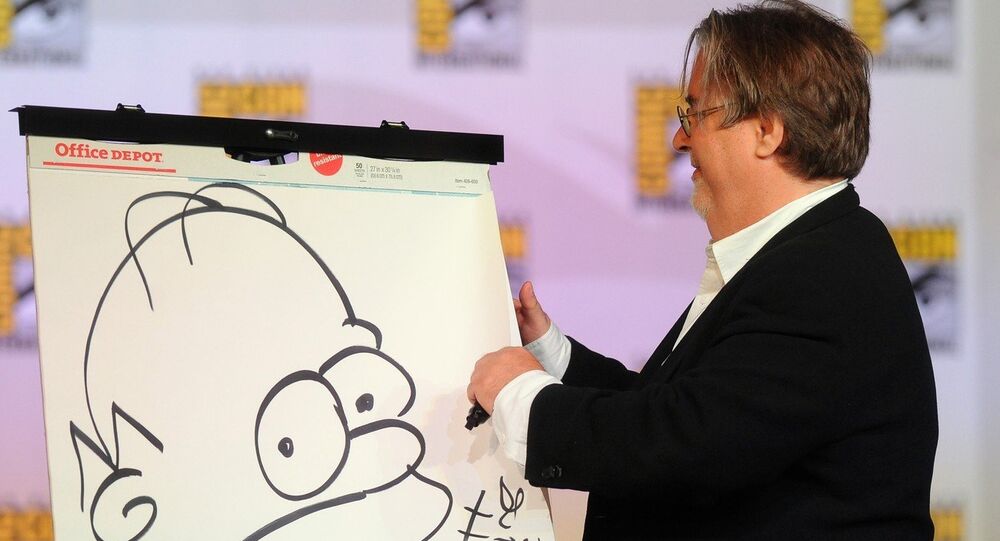 While under oath, Virginia Roberts, 35, one of convicted sex offender Jeffrey Epstein's former 'teenage sex slaves', detailed how she was forced to massage 'The Simpsons' creator Matt Groening's 'crusty' toenails during a flight on the pedophile's private jet in 2001, The Daily Mail reported, citing newly-unsealed court documents.

According to media reports, the documents were unsealed by a judge earlier this month and are part of a lawsuit that Virginia Roberts filed in 2015 against accused the deceased American sex trafficker and his reported madam and English socialite former girlfriend, Ghislaine Maxwell.

Buried within some 2,000 pages of records is a copy of the former teenage sex slave's memoir, shedding light and details of her shocking life with the wealthy American pedophile, The Daily Mail said.

"Matt Groening, the producer of The Simpsons was catching a ride with us. I was so excited, as I loved watching the show and acted like a star struck fan, asking him everything from his initial idea for creating the show to where he got his characters from [...] He told me it was all based on his own family make up but without the crazy father and son scenes of Homer's hand around Bart's throat [...] I was enjoying our conversation when Jeffrey insisted that I gave Matt a foot massage throughout the duration of the short flight. I never turned down a client, but, when I saw the shape of his feet...", Roberts recalls in her memoir, cited by The Daily Mail.

According to Roberts, cited by UK-based media, the encounter with the famous cartoon creator occurred on the plane in Carmel, California, the day after procuring another young girl she said she met on the street for Epstein to have sex with.

"[Groening] had yellow crusty toenails that even someone with a chainsaw would've had troubles cutting through and then there was the fluffy balls of leftover pieces of sock wedged between he crevices of his sweaty toes, now that was the real icing on the cake for me [...] No way could I attempt this, I thought [...] Then I had an idea. I went to the back of the plane and rinsed a wash cloth in warm soapy water and returned for his dreaded foot massage but not before attempting to clean them first", Roberts wrote in her memoir, according to The Daily Mail.

Roberts reportedly finished this episode of her memoir with Groening's reward for her forced service. The Simpson creator drew a signed sketch of Homer and Bart Simpson.

'In return for my services Matt was kind enough to draw me two quick sketches on blank paper from his briefcase of my two favorite characters, Homer and Bart [...] I asked if he could make them out to my little brother and dad, Next to the A-4 size drawing he was able to fit the quote "To my greatest fan from Matt Groening" and their names next to it", Virginia Roberts recalled, cited by The Daily Mail.

Roberts also noted in her memoir how Epstein sought to impregnate her. Roberts detailed that she was 15 at the time she was hired to have sex with both Maxwell and Epstein, who were a couple at the time, according to The Daily Mail.

Epstein's death by hanging has been met with suspicion as the American pedophile who is linked to many famous and powerful people, including US Presidents Bill Clinton and Donald Trump, was inexplicably taken off suicide watch, despite reportedly trying to kill himself just weeks earlier.

In July 2019, Epstein was arrested a second time and charged with trafficking minor girls at his residences for sex. Some of the charges date back to the 2000s. Epstein pleaded not guilty to all charges, but faced up to 45 years in prison had he been convicted.

As more rumours emerge regarding the mysterious death of the pedophile, more details appear about the the accused sex trafficker's social circle while victims continue to demand justice in New York state courts.