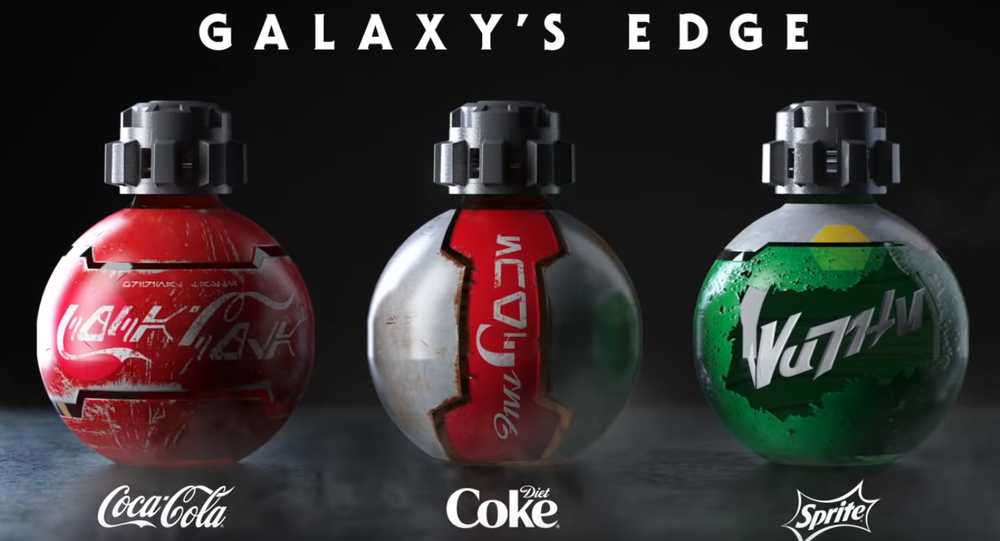 The US Transportation Security Administration is cracking down on a popular Disney theme park collectible soda bottle that they believe resembles a real explosive.

Though the agency has not released a statement in reference to the specific bottles, they did respond to one Twitter user’s inquiry about whether or not they would be able to board with the $5 soda bottle. The agency noted that “replica and inert explosives aren't allowed in either carry-on or checked bags.”

Thanks for asking! Replica and inert explosives aren't allowed in either carry-on or checked bags.

Coke, Diet Coke and Sprite “thermal detonator” sodas are exclusively available within Disneyland’s Galaxy’s Edge park, which opened back in May, and are designed to resemble the palm-sized explosive devices used by several characters in the “Star Wars” franchise.

A second Galaxy’s Edge location will open in Disney World on August 29.

Despite being a fictional weapon, the security agency is not taking any chances. One cheeky netizen attempted to reason with the TSA and asked if they could still carry the collectible if the lid was removed - TSA was not amused.

“Even with a normal bottle cap, this item is still considered a replica and is not allowed in carry-on or checked bags,” the @AskTSA account said in response. “If our officers discover a replica item during screening and believes it's real, the item will be treated as such until advised otherwise by law enforcement.”

Apparently not all officers received the memo because Twitter user @TigerLily1276 claimed she was able to successfully board her flight with empty “thermal detonator” bottles at Florida’s Orlando International Airport and the John Wayne Airport in California.

Naturally, netizens were not too enthused with the agency’s ban and many suggested that TSA worry more about real threats than fictional explosives.

Can I travel with this packet of replica santa grenades in december? pic.twitter.com/09VZOn7Bfv

If a TSA agent genuinely believes that these bottles could be real explosives (or that they are replicas of real explosives), is that agent truly competent enough for us to trust them to help keep our airports and planes safe?

FFS, TSA. That’s asinine. Quit being so lazy, and stop with the security theater.

Replica mini lightsabers in a bottle are also on the naughty list I presume. pic.twitter.com/MFchgs78Mh

So, if you want to bring empty ones home, what if you pack them without the lids, and put the lids in a separate bag? The bottles without lids would look no different than Christmas ornaments, and the lids by themselves wouldn’t resemble anything either...

I’m just going to wrap it in green paper and tell them it’s a Christmas ornament. pic.twitter.com/vsga21WkXq

Yes, I can bring a 6.99 inch screwdriver. Which one is more dangerous? #TSA #StarWars #Dumb pic.twitter.com/2faJL6mL23

One Twitter user pointed out that the design is a simple derivation of Coke’s holiday ornament bottle.

It is doubly stupid because the @CocaCola holiday ornament bottles were never banned. The only difference? The writing on these is in plain old #English. pic.twitter.com/yqeT3e4edY

Replica items are not allowed on aircraft,” TSA spokesperson Jim Gregory told the OC Register in a Tuesday phone interview. “It could create concern that it’s the real thing.”

Interestingly enough, the agency makes it clear that although “the technology doesn't currently exist to create a real lightsaber,” passengers can still pack their version of the fictional weapon in their luggage.