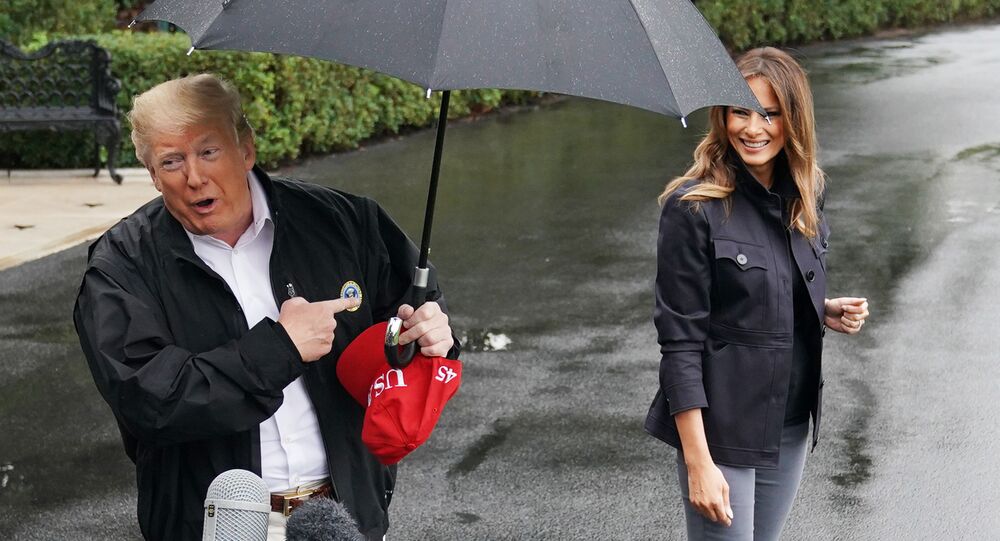 The notion of resorting to nuclear weapons to crack down on hurricanes has been suggested before, with a US National Oceanic and Atmospheric Administration fact sheet about tropic cyclones emphasising the unlikelihood of it working, and the potential dangers involved.

US President Donald Trump has refuted a "ridiculous" report from the news portal Axios, claiming that he had on several occasions discussed with national security officials the possibility of using nuclear bombs to prevent devastating hurricanes from reaching the US.

The story by Axios that President Trump wanted to blow up large hurricanes with nuclear weapons prior to reaching shore is ridiculous. I never said this. Just more FAKE NEWS!

The publication's source cited the US president as saying:

"Why don't we nuke them? They start forming off the coast of Africa, as they're moving across the Atlantic, we drop a bomb inside the eye of the hurricane and it disrupts it. Why can't we do that?".

While the story has immediately gone viral, Twitter reactions were more than forthcoming, with some users taking the idea quite seriously, and responding with either disbelief or grave concern:

This is exactly what @sarahkendzior has been warning for +2 years. Trump has an infatuation with using nuclear weapons.

Because he can't sell to Congress that using them on enemies at this time would be a positive thing, he instead floats this insane idea.

We need a stronger exclamation than WTF. pic.twitter.com/L6ZiO7WJoH

He’s only worried because gutted all relief funding for his failed tax plan for the rich! He must go! Enough! Trump is destroying America!

He wants to launch nukes so badly. I think this is our only warning on that subject.

​Others quickly picked up on the idea Trump was playing the media again:

Have you figured out yet he's an expert at playing the media?

I love when Trump plays the media over and over again like a fiddle. #SUCKERS~

LMFAO. the actual funny part about this is that lefties will believe it 😭😭😭😭😭

​Others just had a load of fun toying with the idea:

I'm guessing "Armageddon" was the in-flight movie on Air Force One.

PLEASE...Take the codes away from him..

​Using nuclear weapons to stop the approach of deadly hurricanes has been suggested before. However, according to a US National Oceanic and Atmospheric Administration fact sheet the plan would most likely do more harm than good:

"Apart from the fact that this might not even alter the storm, this approach neglects the problem that the released radioactive fallout would fairly quickly move with the tradewinds to affect land areas and cause devastating environmental problems", the sheet reads.