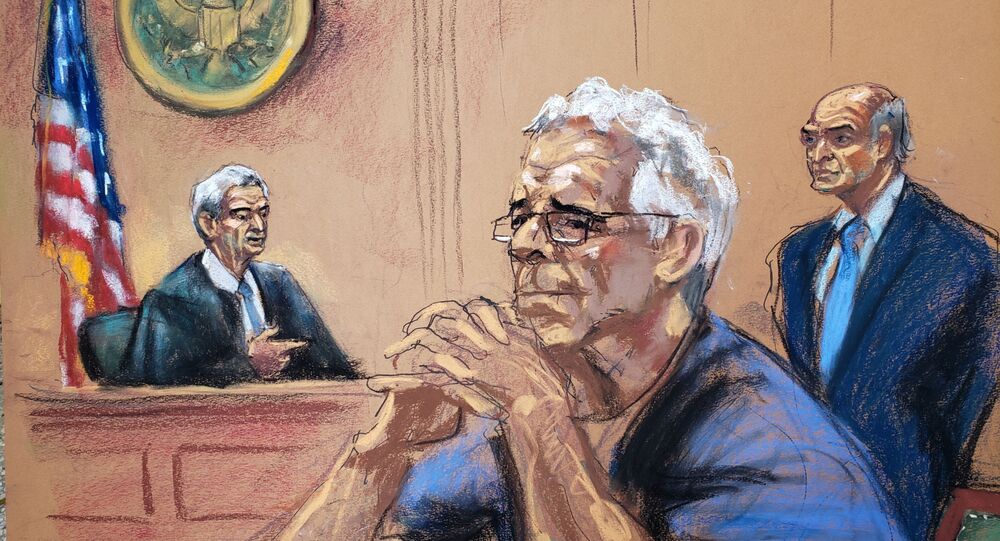 Jeffrey Epstein was found dead on 10 August in the New York detention facility where he had been awaiting trial on charges of sex trafficking involving minors. Authorities confirmed suicide as the cause of death, but suspicious circumstances surrounding Epstein’s imprisonment have since prompted two investigations into the case.

Innocence en Danger (Innocence in Danger), a French non-profit organisation fighting child sexual abuse, says it has received witness statements from 10 people who claim to be victims or witnesses of sexual violence linked to the late US financier Jeffery Epstein.

The group’s president, Homayra Sellier, said that its lawyers would file legal complaints and hand them over to prosecutors both in France and the United States.

"We hope that the French judiciary, if it has not already opened an investigation by then, will have sufficient evidence to do so," Sellier said, as quoted by Le Parisien.

The allegations are said to involve one of Epstein’s close friends, 72-year-old model agent Jean-Luc Brunel. He was mentioned in a 2015 lawsuit brought by Virginia Roberts Giuffre, who has accused Epstein of rape as well as bringing teenage girls from France to the United States on model visas. Brunel has denied those accusations but has yet to comment on the latest complaints.

Allegations have also surfaced that minors may have been abused at Epstein’s apartment near the Champs-Elysees in Paris.

US Attorney General Comments on the Case

The FBI and the Justice Department’s inspector general are currently investigating Epstein’s death, but “unfortunately, there have been some delays because a number of the witnesses were not cooperative,” US Attorney General William Barr told reporters on Wednesday.

“A number of them required having union representatives and lawyers before we could schedule interviews. However we are moving expeditiously and I think soon I will be in a position to report to congress and the public the results.”

Barr – the nation’s top law enforcement officer – has also played down conspiracy theories that have been running wild since Jeffrey Epstein’s death behind the bars on 10 August.

The death was a suicide by hanging, the New York medical examiner's office has ruled after an autopsy. Speculation was still abound following the news, with theories surfacing that the 66-year-old financier was murdered as a cover-up due to his connections with prominent political figures.

But Barr shrugged off the allegations on Wednesday, telling reporters in Dallas that he has “seen nothing that undercuts the finding of the medical examiner that this was a suicide.”

Epstein was being held at the Metropolitan Correctional Centre (MCC) in downtown Manhattan pending trial on underage sex trafficking charges. Following his death, the detention facility faced questions about how such a high-profile inmate could die while in federal custody.

It emerged that Epstein had been placed on suicide watch after an apparent suicide attempt in late July, but removed from it in the days leading up to his death.

Barr said he believed that were “some irregularities” at the MCC.

Following media reports suggesting that it was understaffed and overworked, the attorney general removed Acting Director of the federal Bureau of Prisons, Hugh Hurwitz, from his position.

Hurwitz, who has headed the agency since May 2018, was replaced by Kathleen Hawk Sawyer. She was the bureau’s director between 1992 and 2003.

Barr said he was confident that Sawyer would “be able to address any management or operational deficiencies at the bureau.”

The FBI and the Justice Department’s inspector general are investigating Epstein’s death, but “unfortunately, there have been some delays because a number of the witnesses were not cooperative,” Barr remarked.

“A number of them required having union representatives and lawyers before we could schedule interviews. However we are moving expeditiously and I think soon I will be in a position to report to congress and the public the results.”

Epstein was arrested in July 2019 on suspicion of trafficking underage girls at his mansion for sex and faced up to 45 years in prison. He pleaded not guilty to the charges, some of which dated back to the 2000s.

He was already convicted for soliciting a minor in 2008 and ended up serving 13 months in jail.