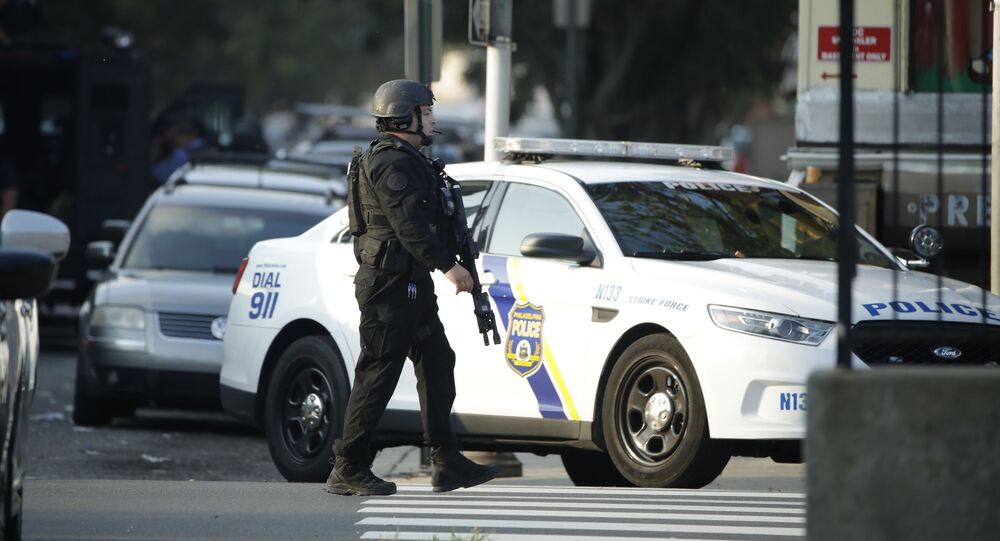 Six officers were wounded by gunfire "in various parts of their bodies," Police Commissioner Richard Ross told reporters at a briefing. Another officer was wounded in a car crash, along with a pedestrian. None had life-threatening injuries. Following the wounding of the sixth officer at the scene, police tried to negotiate with the shooter, "imploring him to surrender and avoid further injuries."

NBC10 reported that at least one suspect was in police custody and officers continue to search for a second gunman. Fox 29 reported there were "shots still being fired at the scene" and the outlet reported that two narcotics officers "remain barricaded inside the house with a shooter." One later escaped, but Ross said police feared a hostage situation could develop.

Later, two officers, who were trapped inside Philadelphia home with gunman, have been "safely evacuated" by a police SWAT team, according to local police.

Commissioner Ross told reporters that while officers with the Narcotics Strike Force served a warrant, they rushed several suspects upstairs and a gunman on the lower floor fired at them through the floorboards using what the source described as an AK-47 machine gun.

"Officer calls for everything you got. SWAT, long gun," a law enforcement officer cried out on the police radio at 4:30 p.m. Wednesday. "I got an officer shot."

​The police response was truly massive: four city blocks full of dozens of police cars had totally shut down traffic through the Nicetown-Tioga area near Temple University. A lockdown was put into place, but lifted at 7:04 p.m.

Agents from the Bureau of Alcohol, Tobacco, Firearms and Explosives (ATF), a US federal law enforcement agency, were reportedly on the scene to assist Philadelphia police, according to a bureau spokesperson.

Footage from the scene showed police and bystanders hiding behind cars for cover. One bystander told an ABC6 reporter she heard "like a hundred shots" on the 3700 block of North 15th St.

"It was like a war," a local mother told told NBC10. "Like the scenes that you see in war. The guns, the fire, the noise. It was like bombs going off simultaneously at a time where people are having dinner."

Citing police, Fox 29 reported the shooter was livestreaming the incident on Facebook.

#Breaking Philly police report the shooter is livestreaming the shooting on Facebook.

​The Southeast Pennsylvania Transit Association (SEPTA) said its Broad Street Line trains would bypass the nearby Erie Station until the situation was resolved.

BSL: Service will temporarily bypass Erie Station in both directions due to police activity. Bus route 4 or 16 are available on street level.

Eighty children from a daycare on the block were evacuated after remaining in a "shelter in place" situation for several hours.

US President Donald Trump has been briefed and is tracking the situation from the White House.