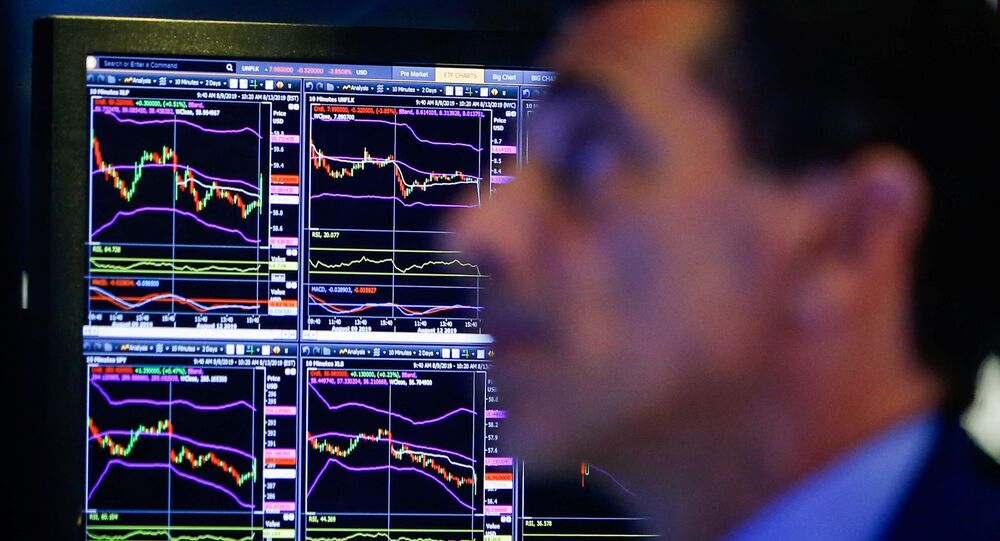 US stocks plunged rapidly on Wednesday, following news that several European countries could soon see slumping economies and the arising of a key indicator of coming recession.

Wednesday was the worst day for US stocks in 2019 and the fourth-largest point drop on record for the the Dow Jones Industrial Average, which declined by almost 3% amid poor economic reports from Germany and the United Kingdom, and the discovery of an “inverted yield curve” in US savings bonds. Economists fear the news signals a recession on the horizon.

Short-term 10-year US savings bonds started selling higher than longer-term 30-year bonds on Wednesday, for the first time in a decade. The phenomenon has preceded every recession in modern history, and investors reacted accordingly.

Yannis Koutsomitis, a Belgium-based political and economic analyst, told Sputnik Wednesday that "Germany and the UK will almost certainly go into recession in the next quarter, and the US bond yield curve inversion is a strong indication that the US could follow suit next year."

The world market is growing increasingly unstable. The Buenos Aires Stock Exchange crashed by 38% on Monday amid news of a leftist victory in primary elections, and the Argentine peso lost 11% of its value as the state bank slashed exchange rates. Chinese markets also declined by 2.6-3.3% on August 6 as a result of the ongoing trade war with the US.

US President Donald Trump, however, took the opportunity to praise US economic performance, insisting the US was "winning" the trade war "big time."

..Spread is way too much as other countries say THANK YOU to clueless Jay Powell and the Federal Reserve. Germany, and many others, are playing the game! CRAZY INVERTED YIELD CURVE! We should easily be reaping big Rewards & Gains, but the Fed is holding us back. We will Win!

​"China is not our problem, though Hong Kong is not helping," Trump tweeted Wednesday afternoon, about 40 minutes before the New York Stock Exchange closed. "Our problem is with the Fed. Raised too much & too fast. Now too slow to cut. Spread is way too much as other countries say THANK YOU to clueless Jay Powell and the Federal Reserve."

The purpose of cutting interest rates is to encourage investment by making loans cheaper to repay. The downside of low interest rates is their potential to cause inflation and a "liquidity trap," a situation in which interest rates are so low that they stop spurring the economy to grow and instead result in the concentration of cash in non-productive sectors of the economy such as the stock market, Sputnik noted.

US stocks have slumped overall by nearly 7% in the last three weeks.