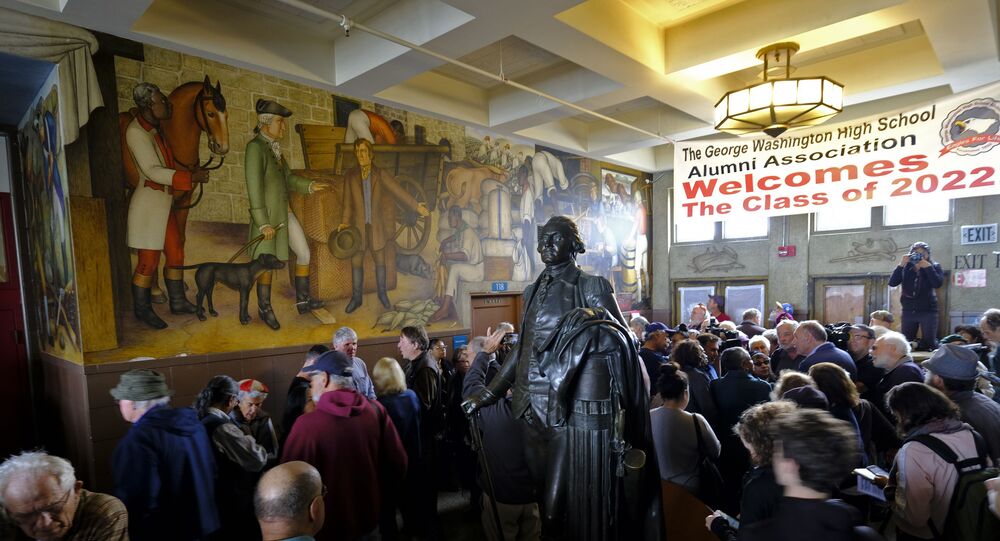 San Francisco's school board voted in June to paint over the controversial mural at George Washington High School that depicts scenes from the life of the first president and includes imagery of slaves working on his plantations.

A school board has ordered an historic 83-year-old mural depicting the life of George Washington and featuring imagery of slaves working on the first president's plantations and soldiers standing over a Native American corpse to be covered up, CNN reports.

The vote was 4-3 among the San Francisco Unified School District Board of Education.

The mural at George Washington High School will be concealed by panels to show “the heroism of people of colour in America,” it was announced on 13 August.

"Where we all agree is that the mural depicts the racist history of America, especially in regards to African Americans and Native Americans. It is important that we all share the agreement and acknowledgement of racism, discrimination, and the dehumanising of people of colour and women in American history,” said School Board President Stevon Cook.

The board had previously voted in June to paint over the “Life of Washington”.

“We are not going to paint over public art. We're going to find another way to keep it from public view,” Cook said.

The decision to cover up the 1,600-square-foot historic mural shall require an environmental review first, with the controversial art remaining on display at least until then, with the cost of the procedure expected to run into the hundreds of thousands of dollars.

Experts claim the panels might be made removable, while the school board said the mural would be digitised for art historians to be able to see it.

The new decision elicited a mixed response, as a teacher, Virginia Marshall, was reported by KTVU-TV as saying:

“I am a great granddaughter of a slave. I don't need a mural in my school or office to tell me I'm a slave.”

Arianna Antone-Ramirez, a 2016 graduate of the district’s Galileo Academy of Science and Technology High School and part of the Tohono O’odham tribe, stressed that the cited cost of concealing the mural would be worth it.

Others said destroying the mural would be historical and artistic censorship.

"I hope that this board would leave that mural alone. It tells the whole truth about Mr. Washington's being complicit in the slave trade,' said the Rev. Amos Brown, president of the San Francisco branch of the NAACP.
“Art has to make us feel uncomfortable. That's what art does,” said actor Danny Glover, a Washington High graduate.

Social media users also entered the discussion, with many deploring the decision to remove the mural from public view.

History should not be covered up - we should live learn and grow from this - instead of whitewashing our past let generations to come see how far we have progressed as humans and even when mistakes however horrid are made we can come through and live peacefully and sustainably! pic.twitter.com/qn6UDxLnKV

Destroying history and culture of a group is genocide according to international law.#WhiteGenocide pic.twitter.com/RvpxJwmjus

The mural, painted by Victor Arnautoff and titled "Life of Washington", was commissioned in 1936 under a New Deal era art programme.

The 'Myth' of American Slavery and Other Failures of US Education