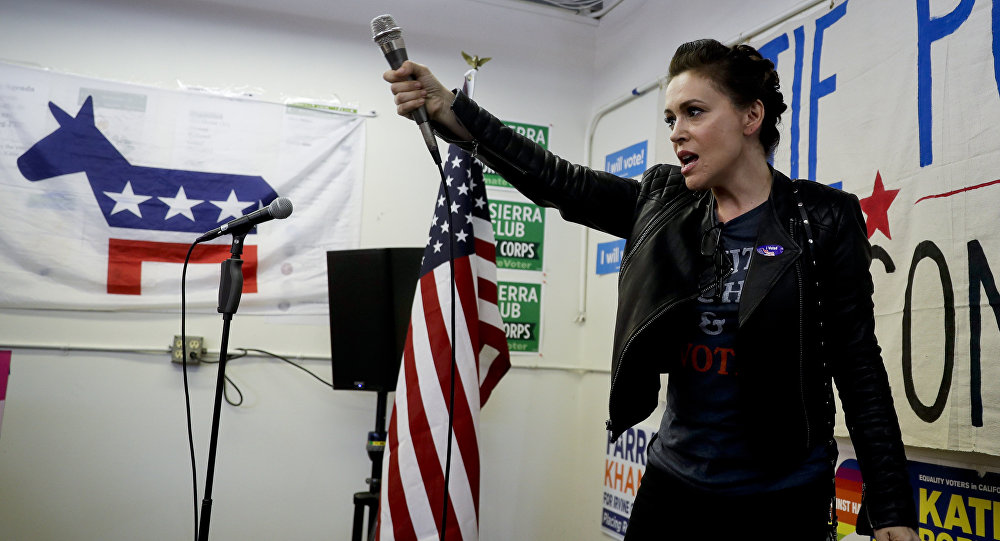 Noting how the Democrats lost in the three key swing states of Pennsylvania, Michigan and Wisconsin by a slim margin in 2016, Alyssa Milano has vowed to prevent it from happening again in 2020.

American actress and political activist Alyssa Milano has announced a new initiative aimed at securing victory for Democrats in Michigan, Wisconsin and Pennsylvania in the 2020 presidential election.

The goal of her so called "2020 Fund", which is partnered with Movement Voter Project, is to "raise money for three of the best local grassroots organisations" in each of the three states which Milano described as "the most critical 2020 swing states," according to a statement on the fund’s website.

"These organizations empower youth, immigrants, women, people of color, and communities facing the worst of Republicans’ horrible policies. They fight tirelessly on the issues AND Get Out The Vote," the actress wrote.

She also complained on Twitter that in 2016, Democrats lost these states "by 77k votes," and that she "will not allow that to happen again," urging people to donate to her cause.

Her message elicited a mixed response on social media, as many praised her initiative and expressed their intent to contribute to it.

We love you Alyssa. Thank you for using your platform to make a difference in the world. Not all public figures do, and regardless of whether or not people agree with your personal views, they should at least respect that. ❤

My plan is to emulate you... if we collectively did 1/10 of what you do, America would be a much better place.#ThankYouAlyssa

Any increase in Democratic turnout in WI will also help the local elections. We are extremely gerrymandered and held hostage by the GOP majority. #2020Fund

However, there were also those who were less thrilled with Milano’s scheme, with a number of people openly voicing their support for Donald Trump.

Here in northern lower Michigan and the U.P., we don't need need outsiders telling us how to vote.

A better plan for 2020 would be for you to find a home in another country and move there.

You're going to lose those states anyway.

I hear you can get dirt cheap deals in Venezuela now.

I would let my dogs use my money as wee wee pads before I ever gave it to you @Alyssa_Milano PS, I wouldn’t use the word “allow” you sound a lil Nazish🤦🏻‍♀️

As a life-long Michigander who has seen the destructive policies of Democrats in my beautiful state...GET LOST! We've had enough