US multi-millionaire and convicted sexual offender Jeffrey Epstein was found dead in his jail cell Saturday morning after being removed from suicide watch. This followed an assault from an inmate and Epstein himself informing guards that he believed someone was trying to kill him.

About 38 minutes prior to the official confirmation of accused sex trafficker and pedophile Jeffrey Epstein on ABC, the story was posted on 4Chan, an online forum, according to Buzzfeed.

“Don't ask me how I know, but Epstein died an hour ago from hanging, cardiac arrest. Screencap this,” according to an 8:16 am post. 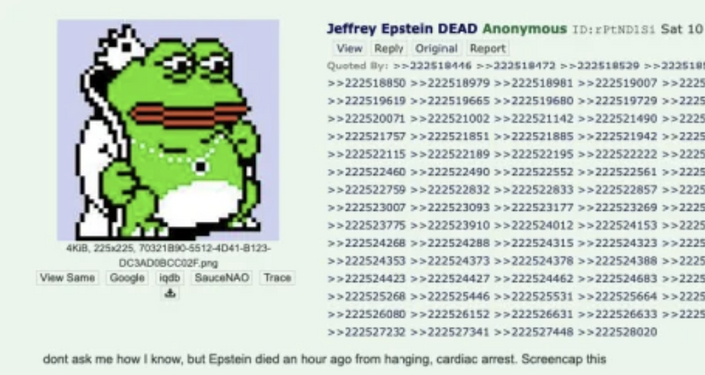 The thread was captioned by an image of Pepe, the popular online meme of a green frog.

Other 4chan users demanded the author explain the story and questioned it, as many did not believe the post.

The internet exploded in response to the information that an anonymous 4chan poster broke the news globally.

Some brushed off the author's claims while others claimed that it corroborated conspiracy theories surrounding the alleged suicide.

The original poster provided further information to the thread, including the specific procedure which was allegedly used to attempt to resuscitate Epstein, implying that the online post was created by a first responder, someone working in emergency services, or a 3rd party recipient of that information.

The post was corroborated by Dr. Keith Wesley, an emergency medicine physician and medical author who observed the 4chan post and confirmed that it lays out typical procedures for paramedics. “This sounds like standard American Heart Association guidelines, which most EMS agencies use,” said Wesley.

The Fire Department of New York (FDNY) rejected assumptions that one of their members made the post.

"An investigation is a formal act which brings about a process which includes interviewing witnesses, serving notice, determining credibility of witness statements — and that was not warranted nor did it take place here. This determination was made after a review of the incident. We looked at the information provided by a BuzzFeed News reporter and we looked at our own records and there was no match," said an FDNY spokesperson.

Alongside the FDNY, the union for EMT workers in New York, claimed that “our members do not release this type of confidential information, this looks like a 3rd party info.” Barzilay also told BuzzFeed News the union would investigate the potential breach of confidentiality “if such a claim came forward,”

The new of Epsteins death followed revelations that the pedophile had a vast social circle of celebrities, politicians, and royalty.

Many of these powerful individuals have flown on Epstein's private plane or attended parties with him.

All have denied that they knew anything regarding his criminal behaviour, but the 4chan post has given new life to conspiracy theories.

Trump retweeted a supporting conspiracy theory which attempts to connect the Clintons to Epstein's death.

'Not That Jeffrey': Epstein's Namesake Weathers a Storm of Online Abuse After Billionaire’s Death