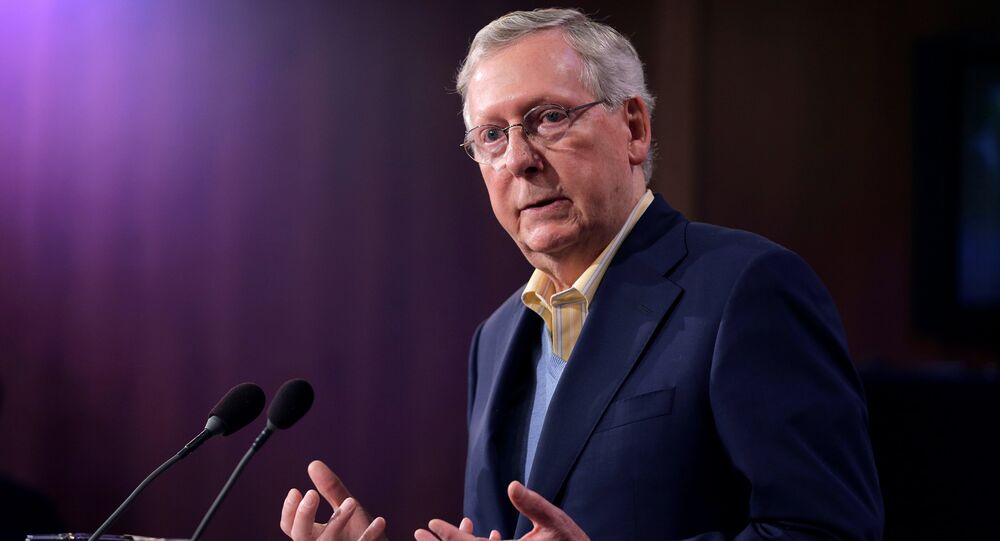 Twitter backed down and allowed Mitch McConnell back on the platform a day after major GOP groups threatened to launch a boycott of ad spending on the social media giant in protest.

Thank you to EVERYONE for helping #FreeMitch.

McConnell’s Team Mitch campaign page was suspended Wednesday after posting a video of protesters outside the Senate majority leader’s home. The video included profane language and violent threats against him, yelling for McConnell to ‘die’. Twitter said it locked the account because the video violated its violent threats policy, “specifically threats involving physical safety.” McConnell’s campaign would have to delete the video in order to restore his Twitter privileges.

President Trump’s re-election campaign, the Republican National Committee, the House and Senate GOP campaign arms and the Senate Leadership Fund all announced a suspension of ad spending, citing anti-conservative bias. Together the organization contribute hundreds of thousands of dollars into Twitter’s ad revenue – for example, Trump’s re-election campaign alone had forecast between $300,000 and $500,000 in Twitter spending for August, the campaign told The Post.

“Several Twitter users, including US Senate Majority Leader Mitch McConnell’s campaign account, were temporarily locked out of their accounts for Tweeting a video that violated our abusive behavior policy. […] After multiple appeals from affected users and Leader McConnell’s team confirming their intent to highlight the threats for public discussion, we have reviewed this case more closely,” the Twitter communications team wrote, without mentioning the boycott, deciding that the video will remain visible on the service with a sensitive media interstitial.

‘I’ve Singled Out Putin as an Adversary’: McConnell Blasts Allegations of Kremlin Conspiracy