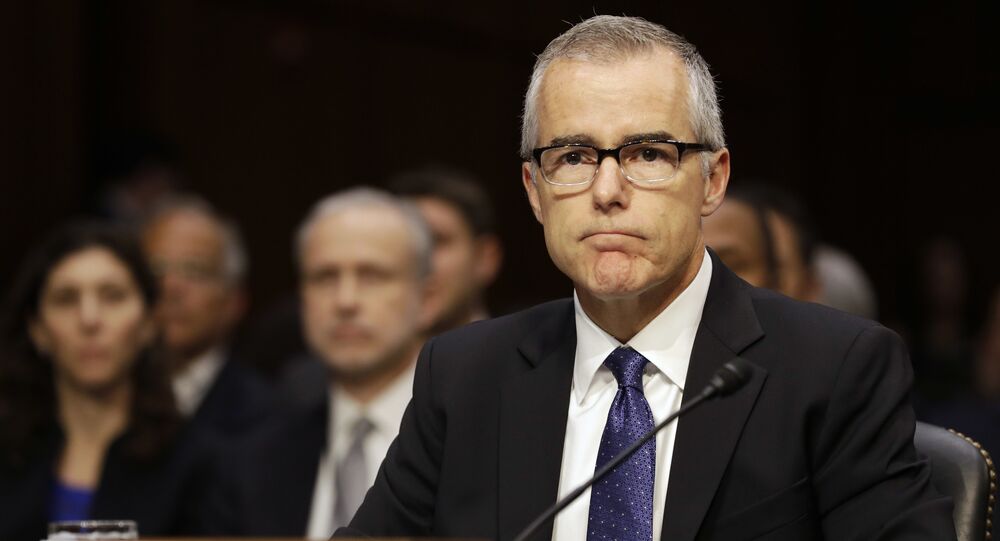 Just a day after disgraced FBI agent Peter Strzok filed a lawsuit against the bureau and the US Department of Justice arguing he’d been wrongfully terminated, former acting FBI Director Andrew McCabe has done just the same.

In a lawsuit filed in the US District Court of the District of Columbia Thursday, McCabe, who lost his job as deputy director on March 16, 2018, asks that he be reinstated to the position in order to collect his full pension. McCabe was terminated just two days before he was set to retire, depriving him of a pension for his 21 years with the law enforcement bureau.

McCabe claims in the suit that he was a victim of US President Donald Trump’s “unconstitutional plan and scheme to discredit and remove DOJ and FBI employees who were deemed to be his partisan opponents because they were not politically loyal to him … Were it not for Trump’s plan and scheme and the complicity of Defendants and other Executive Branch subordinates, Plaintiff would have otherwise been permitted to retire as he had long planned.”

According to US Justice Department Inspector General Michael Horowitz, McCabe was fired as part of an investigation into whether he was "responsible for approving an improper media disclosure” when the Wall Street Journal published a report just weeks before the 2016 presidential election detailing the FBI’s investigation into Democratic candidate and Trump rival Hillary Clinton’s use of a private email server.

Ironically, this was interpreted as a pro-Trump maneuver by many Democrats, who felt the revelation weakened Clinton’s standing among voters.

The Washington Free Beacon estimated McCabe has lost out on $1.8 million in pension checks due to his last-minute termination. However, when a GoFundMe was established just days after his firing, he quickly accumulated over twice the sought after amount to cover his legal fees - over $500,000. On top of that, he’s still receiving $40,000 a year in reduced pension payments, according to the outlet Government Executive, so he’s not exactly cash-strapped.

Plus, he’s got money from his book sales. This past February saw the release of McCabe’s memoir, which focused heavily on the Trump presidency. “The Threat: How the FBI Protects America in the Age of Terror and Trump” hit the tops of the New York Times, Wall Street Journal and Washington Post bestseller lists.

In an interesting revelation from the book, McCabe said that immediately after becoming the acting FBI director upon James Comey’s termination in May 2017, he took part in meetings at the Justice Department intended to establish whether Vice President Mike Pence or a majority of Trump’s Cabinet would support the invocation of the 25th Amendment to the US Constitution, which permits a president’s removal from office if he’s deemed mentally unfit for the job.

Strzok, another FBI agent who was fired in 2018, filed a suit in the same court on Wednesday, arguing that he’d been wrongfully terminated because his personal text messages that disparaged the president were protected speech and that he’d been denied due process by not being allowed to appeal his firing.

Andrew McCabe: The Politics of an Attempted FBI Coup