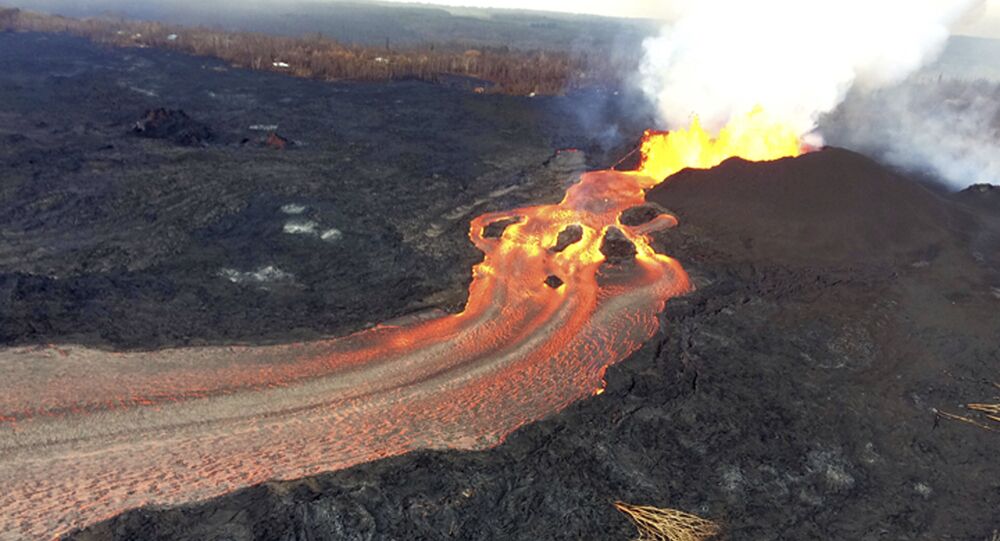 Several weeks ago, a helicopter pilot flying over Hawaii’s Kilauea volcano, which has gone into a relatively calm state after a 30-year active stretch, spied an odd green patch at the bottom of the crater, prompting scientists to embark on further investigation.

A hidden pond of water has been discovered for the first time inside the summit crater of Hawaii’s Kilauea volcano, officials with the US Geological Survey have said.

Kilauea, after a 30-year active period is now in a relatively dormant stage, and has the hidden potential, according to scientists, to set off future explosive eruptions.

On 1 August the experts flew over the site to confirm that the accidental sighting of a small green patch at the bottom of the volcano's Halemaumau crater made by a helicopter pilot several weeks ago.

According to Don Swanson, scientist emeritus at the Hawaiian Volcano Observatory, part of the US Geological Survey, the follow-up study showed the patch actually consisted of three separate ponds, the largest of which is between 36 and 46 feet (11 to 14 meters) wide.

The expert believes the ponds formed from groundwater seeping in through cracks in the rocks.

"We have no reason to think that the ponds won't coalesce and grow into something that maybe would be large enough to be called a lake," Swanson told Live Science.

"This is assuming that no eruption destroys it, of course."

After last year's large eruption, the floor of the crater at the top of the volcano collapsed, leaving the crater now more than 1,000 feet (300 metre) deeper than before the eruption. According to this scenario, the scientist fears the pools of water will likely continue to grow.

An eruption could vaporise the water and carry it away in a cloud of steam. However, if this doesn't happen, the expanding ponds could cause explosive eruptions, as fast-rising magma rapidly heats that water into steam, said Swanson.

Expanding steam might break up magma into volcanic ash and eject them into the air, he said.

"We don't see anything in our monitoring data that might suggest an eruption is imminent. One will certainly occur again — there's almost no doubt about that. Although the explosion potential is there, it's very unlikely that it's going to be in the near term, because there's so little water in the ponds now. What we're talking about is long term," concluded the scientist.

Throughout its history, the Kilaeau volcano has gone through periods of explosive and nonexplosive, slower eruptions. It's been in this so-called relatively calm state for the past couple hundred years.