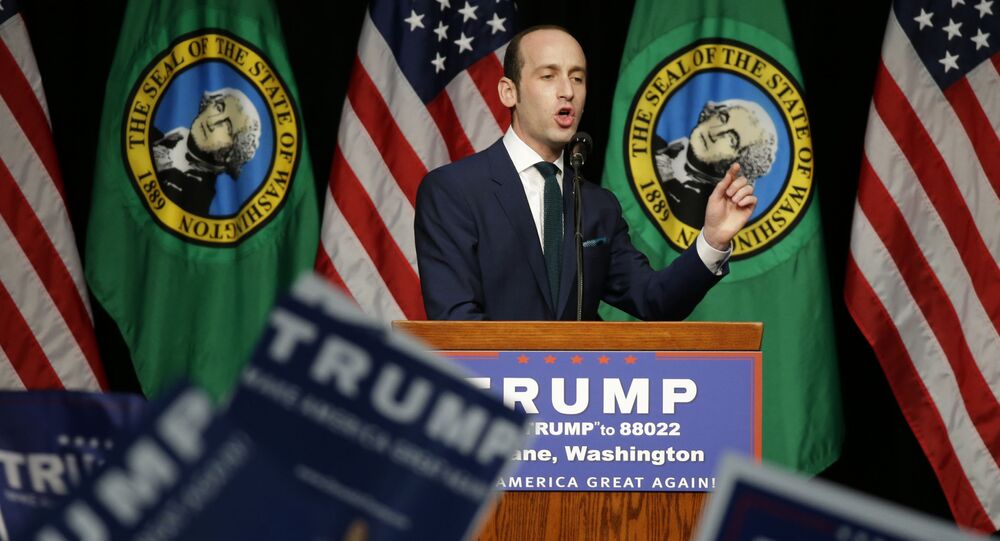 White House Adviser Stephen Miller has pressured the US Customs and Immigration Services to come up with new restictions on green cards and blasted senior officials for failing to move fast on regulations to limit immigration, Politico reported.

Politico claims to have obtained emails suggesting that Stephen Miller, a White House senior adviser, ripped into Francis Cissna, former director of the US Customs and Immigration Services (USCIS), over the agency's alleged inability to produce changes to the so-called public charge rule, which would forbid legal immigrants from applying for green cards.

"Francis — the timeline on public charge is unacceptable. The public charge reg has been in the works for a year and a half. This is time we don't have. I don't care what you need to do to finish it on time. You run an agency of 20,000 people. It's an embarrassment that we've been here for 18 months and USCIS hasn't published a single major [regulation]", Miller purportedly wrote in an email sent on 8 June 2018 and obtained via the Freedom of Information Act.

According to a version of the rule proposed in early October 2018, federal immigration officials would be given the right to deny green cards to legal immigrants who have taken government aid, including food stamps, Medicaid, welfare, etc.

The report by Politico echoes an April story by The New York Times, claming that Miller had criticised senior immigration officials for a lack of progress on public charge and other rules during a White House meeting.

Cissna, who resigned earlier this year, argued that the proposed regulation applied to a very specific set of benefits and called on legal immigrants to not rush to unsubscribe from those social programmes.

"There should not be a mad rush to unsubscribe from all benefits. That is unwarranted, I think. People should look carefully at the proposed rule to see exactly, truly what we're looking at when we're making that assessment", he said last October while delivering a speech at Georgetown University Law Center.

Last month, Jared Kushner, senior adviser to President Donald Trump and his son-in-law, presented an immigration proposal to POTUS' Cabinet that would end legal loopholes affecting border enforcement and set up a merit-based system for immigrants seeking to legally enter the United States.

The reports come as the Trump administration has decided to end a policy that allows Filipino World War II veterans to bring family members to the US before their green cards are available, USCIS announced on Friday. The administration is also nixing a similar programme known as the Haitian Family Reunification Parole Programme.

The diversity visa lottery programme awards roughly 50,000 green cards each year to citizens from different countries around the world to legally live and work in the United States. President Trump has, however, been against the programme, advocating "merit-based" immigration instead.