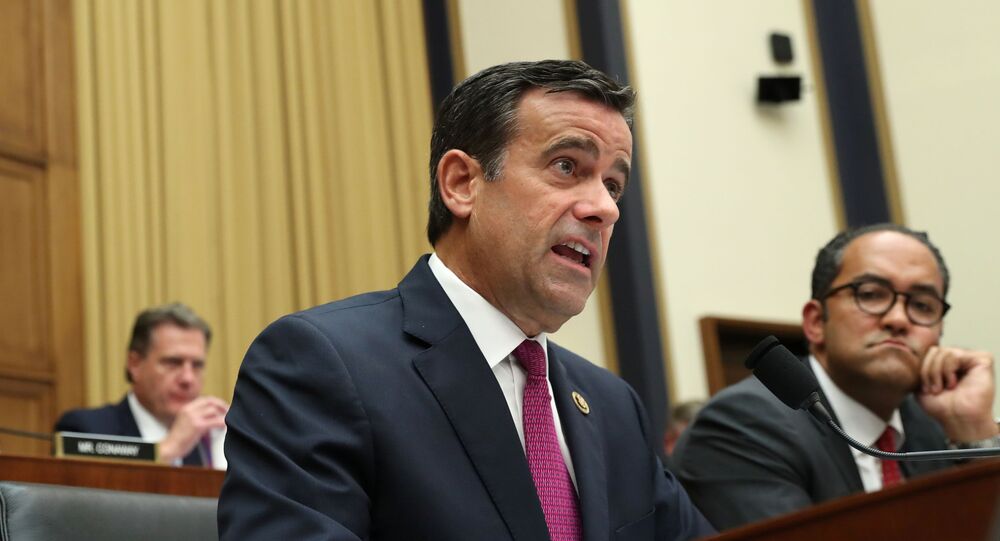 The US President took a humorous tone after a barrage of strongly-worded tweets blaming US mainstream media for its “unfair” treatment of John Ratcliffe, a former candidate for the office of Director of National Intelligence.

US President Donald Trump announced on Friday he was withdrawing his nomination of Ratcliffe for DNI director. In a series of Friday tweets, the US president blamed media outlets for treating Ratcliffe “very unfairly,” adding that the nominee chose to stay in Congress and withdrew his name from consideration.

The US president announced that he would announce a new nominee “shortly”.

"Our great Republican Congressman John Ratcliffe is being treated very unfairly by the LameStream Media. Rather than going through months of slander and libel, I explained to John how miserable it would be for him and his family to deal with these people,” Trump tweeted.

....John has therefore decided to stay in Congress where he has done such an outstanding job representing the people of Texas, and our Country. I will be announcing my nomination for DNI shortly.

​Later that day, Trump, in a more humorous tone, said the media is “doing the vetting” for the White House.

“We have a great vetting process. You vet for me,” the president said Friday evening. ”When I give a name, I give it out to the press and you vet for me. A lot of times you do a very good job. Not always.”

“I give out a name to the press and they vet for me. We save a lot of money that way,” he added.

Ratcliffe’s nomination was dropped after several media reports noted that he had overstated portions of his biography – particularly his experiences tackling cases of terrorism while a federal prosecutor in Texas, The Hill report recalls

Senator Mark Warner, of the Senate Intelligence Committee, said Thursday that if Ratcliffe padded his resume, it would be “clearly disqualifying.”

Following the controversy, Ratcliffe reportedly asked Trump to drop his candidacy, the former saying he does not want a debate around his nomination, “however untrue, to become a purely political and partisan issue.”

Speaking before reporters on Friday, Trump admitted Ratcliffe did not have a lot of experience in the intelligence area, but downplayed the issue.

“He would have had very good support. He wasn't in that world that much. I think he would have picked it up very quickly,” he said.

Trump also claimed that he has a short list of three candidates which the White House is currently looking into.

“I have a list of three people. We're looking at very well-known people. People who the vetting would go very easy because they're in the intelligence world,” he said.

Trump Pick for Next US Intelligence Chief Based on Politics, Not Qualifications - Senator

US Director of National Intelligence to Step Down on August 15, Trump Says