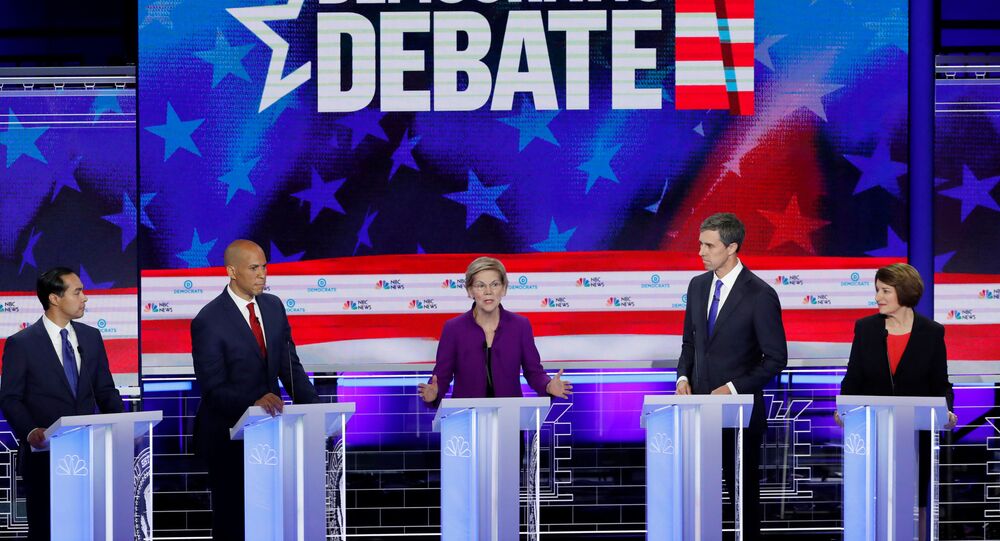 Hillary Clinton Could Teach Candidates How to Lose. Will 2020 Democrats Learn the Lesson?

Donald Trump’s 2016 victory came as a surprise to many Democratic voters, and those vying to replace the president have had almost three years to diagnose Clinton’s mistakes and offer a message that would resonate better with voters.

The next US presidential election is more than a year away now, but there already are nearly two dozen Democratic candidates lined up to try and take on Donald Trump.

The incumbent president certainly has a massive gravitational pull on the Republican Party and its electorate and is very unlikely to face a serious primary challenge. It makes the task for the future Democratic candidate quite clear: simply put, to send a more compelling message than that of Donald Trump.

To achieve this, its helpful to take a second look at the bitter defeat of the Democrats, personified by Hillary Clinton, three years ago.

The former First Lady laid out what she called “progressive vision”, which advocated racial and women's rights, affordable healthcare and an income tax increase; it was mainly backed by younger and minority voters but was not convincing enough in the end.

The success of Donald Trump’s more conservative agenda rested on dominating in rural areas and forging a coalition of wealthier and non-college educated white voters. Moreover, he performed much better than previous Republicans among low-income voters – traditionally a core proportion of the Democratic base – due to his promises to bring jobs back to America and slash income taxes.

Trump’s victory also had an ideological quality – he emerged as the firebrand of a large portion of Americans who felt they were losing ground in an era of ever-growing political correctness and identity politics.

Further to the Left

Joe Biden, Bernie Sanders, and Elizabeth Warren currently lead the Democratic polls; one of them is set to stand up against Trump next year.

The drama of 2016 could have given the Democratic hopefuls the impetus to look for new ways to win back voters. However, their platforms seemingly target the same base that Mrs. Clinton attempted to appeal to.

“When it comes to the Democrats, the major difference between the Democratic candidates in 2020 and [Hillary] Clinton in 2016, is that a large number of them have moved much further to the left,” says Dr. Jeanne Zaino, political analyst and Professor of Political Science at Iona College.

To see if that’s true, it's worth looking at where they stand on matters of major domestic concern – for instance, economic inequality, where tax policy is part of the equation.

To Tax or Not to Tax?

Back in 2016 tax cuts were a major win for Trump as he campaigned (and later delivered) on the pledge to give big tax cuts to working Americans and corporations, while Hillary Clinton instead proposed raising taxes on the very wealthy.

In 2019, a majority of Americans are still in favour of increasing tax rates only for the richest and said the poor and the middle class pay too much, despite the Trump tax cuts, which have gone largely unnoticed.

However, out of the three top Democratic candidates, only Elizabeth Warren who only wants to tax the wealth of the ultra-rich (less than 0.1 per cent of Americans); both Biden and Sanders have promised to raise taxes on middle-earners as well. All explain that the resulting revenue would be used to fund top-priority social programmes.

This is where environmental protection might come into the spotlight. Although in 2016 Clinton pushed for renewable energy and a transition to a lower-carbon economy, Donald Trump came across as a vocal denier of climate change. However, th did not damage his electability in the end.

Fast forward 3 years and climate change could become a weak spot for the incumbent president. Each one of the top Democratic contenders has been citing, each to a different extent, the provisions of the much-vaunted Green New Deal, which has been mocked and attacked by Trump.

© AP Photo / Branden Camp
The coal-fired Plant Scherer, one of the nation's top carbon dioxide emitters, stands in the distance in Juliette, Ga., Saturday, June, 3, 2017. U.S. President Donald Trump declared Thursday he was pulling the U.S. from the landmark Paris climate agreement, striking a major blow to worldwide efforts to combat global warming and distancing the country from its closest allies abroad.

Joe Biden has announced a Clean Energy Revolution, which would include $1.7 trillion to turn the US into an entirely clean-energy economy with net-zero emissions; Sanders promised to move “aggressively into wind and solar and other sustainable energies”, while Warren rolled out a $2 trillion green jobs and energy research package.

Medicare (Virtually) for All

Traditionally at the heart of the presidential race, healthcare has already rattled the Republicans as Donald Trump pledged to make the issue a key point of his 2020 campaign. Over at the opposing camp, healthcare stances vary significantly. Joe Biden has laid out perhaps the most moderate proposals out of the Top 3: he opposes getting rid of private health insurance and wants to build on Obamacare – something Hillary Clinton defended as well.

Sanders, in turn, promotes his Medicare for All health reform bill, that would extend health insurance to all people in the US through a government-run single-payer programme (in the senator’s vision, ‘all people’ here also includes undocumented immigrants).

This plan, which would also eliminate private insurers, is a step towards much more socialised healthcare. It has garnered support from Warren and a handful of other candidates, but got slammed by the Trump team as being “unfair” to working Americans.

Senator @BernieSanders said this morning that his Medicare-For-All plan will cover ALL illegal immigrants.

This is unfair to America's seniors who have worked hard and paid into Medicare their whole life! pic.twitter.com/g3vKkcd2Mc

According to Dr. Thomas Whalen, a political analyst and associate professor of social science at Boston University, however ambitious, the plan could cost Sanders some votes:

“There is popular opposition to this stand because so many Americans, especially blue collar and lower middle class Americans, are barely scraping by economically. They feel they should be given priority over undocumented immigrants.”

Given the potential pushback from the electorate, political commentator Doug Wead argues that the Democrats “will likely back away from such extreme positions as they move to the general election. Wead, who has served as an adviser to two US presidents, says that “if the United States becomes the first nation on Earth to offer free healthcare to anyone who enters its borders, even illegally, it would result in massive immigration and the end of the country as it now exists.”

Immigration in the Focus

Immigration indeed remains the most fundamental domestic issue at hand, and the two parties are universes apart on this matter. In 2016, Trump called for mass deportations and keeping illegal immigrants away from US soil, in general, while his rival pledged to shield them from deportations and stop immigrant raids.

Biden, Sanders and Warren likewise follow that line, expressing a universal condemnation of Trump’s crackdown on illegal immigrants and endorsing the Obama-era pro-immigration policies such as the Dream act.

“It helps them win support from many recent immigrants and from minorities and progressives who favour a socialist state,” says Wead.

Donald Trump’s hard-line stance on immigration has been widely seen as inflammatory, but it arguably was one of the key factors that helped him win in 2016. He went on to frame undocumented immigration as one the key topics of his presidency and is still keeping it high on the agenda to rile up his base, while portraying the Democrats as being out of touch, in an apparent bid to swing moderate and independent voters to his side.

“Donald Trump has made it clear his 2020 presidential campaign is about identity politics,” explains David Schultz, a political science professor at Hamline University.

This risky strategy appears to make sense for the time being, with four in ten Americans believing that the US is facing a crisis of illegal immigration, and a slim majority supporting the sweeping raids targeting migrant families.

Trump’s rivalry with the Democrats is now at its highest peak, following separate racially-charged beefs with four congresswomen and Rep. Elijah Cummings. “The House of Representatives will condemn it, the media will attack it, many Republicans will renounce it. But it may work as an effective 2020 strategy, further motivating Trump’s base to show up and vote,” says Schultz.

“In 2016, Democratic voters stayed home and many swing or centrists went for Trump versus in 2018 they turned out and went for the Democrats,” he concludes. “Trump’s racial themes and language will continue to alienate these centrist voters and push them toward the Democrats, but only if the Democratic candidates give them a reason to vote beyond saying they need to oppose Trump.”