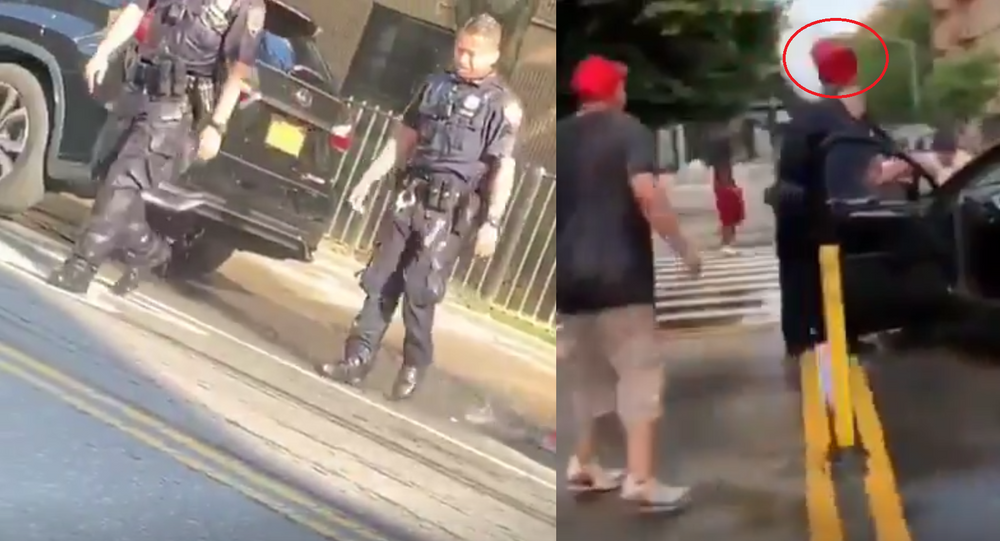 The first piece of footage, posted Monday afternoon, captured an incident that occurred two blocks from the NYPD’s 73rd Precinct station house in Harlem and showed civilians pouring water on officers’ heads while they arrested a man.

One officer is even seen being pelted in the head with a bucket. The cops are not seen reacting to either of the acts on-camera.

It’s worth noting @NYScanner is not affiliated with the NYPD and is operated by a third party.

Another clip emerged from the account hours later, showing two more officers getting doused. One officer appears to be smiling in the beginning of the footage. The account asserts officers are too “petrified” by the water to take action against the civilians.

DISRESPECT: This is what #NYPD Officers are faced with today. Petrified to take action. #BlueLivesMatter @NYCMayor @BilldeBlasio @NYPDnews @NYPD73Pct pic.twitter.com/VRpVKBS5Jb

In addition to Monahan’s statement denouncing the “reprehensible” action toward the officers, the official also used his time at the One Police Plaza to announce the department would be pressing charges.

“Our detectives — and our detectives are the greatest in the world — are looking, and we will identify who was involved, and arrests will be made,” Chief Monahan said Tuesday, as quoted by the NY Post.

According to an NYPD release, those involved could face charges of obstructing governmental administration, criminal tampering, harassment and disorderly conduct.

On Twitter, Pence also communicated his and US President Donald Trump's opposition to the “disgraceful” conduct displayed in the videos and added fuel to “#StandWithNYPD.”

This conduct is disgraceful. President @realDonaldTrump and I will ALWAYS stand with the brave men & women of our law enforcement who serve on the thin blue line everyday. #StandWithNYPD https://t.co/VLIMnUGWDX

Many of those responding to @NYScanner’s tweets used the videos’ popularity to highlight what they believe to be silence and inaction when the roles are reversed.

Several in particular noted last week’s Department of Justice decision to not bring federal charges against Daniel Pantaleo, a still-active NYPD officer whose illegal chokehold is believed to have killed NYC civilian Eric Garner in 2014.

if you protect bad cops why trust any of them?

Sad. Has anyone done a wellness check on those officers' wives?

Overreaction much? Let me know when a cop dies by 16 shots from a super soaker.

I'm just surprised the police didn't just on the spot execute the people spraying the water and just get off scot free by saying the thought the stream of water was a bullet from the matrix.

I'm old enough to remember when the NYPD murdered a man for selling cigarettes.