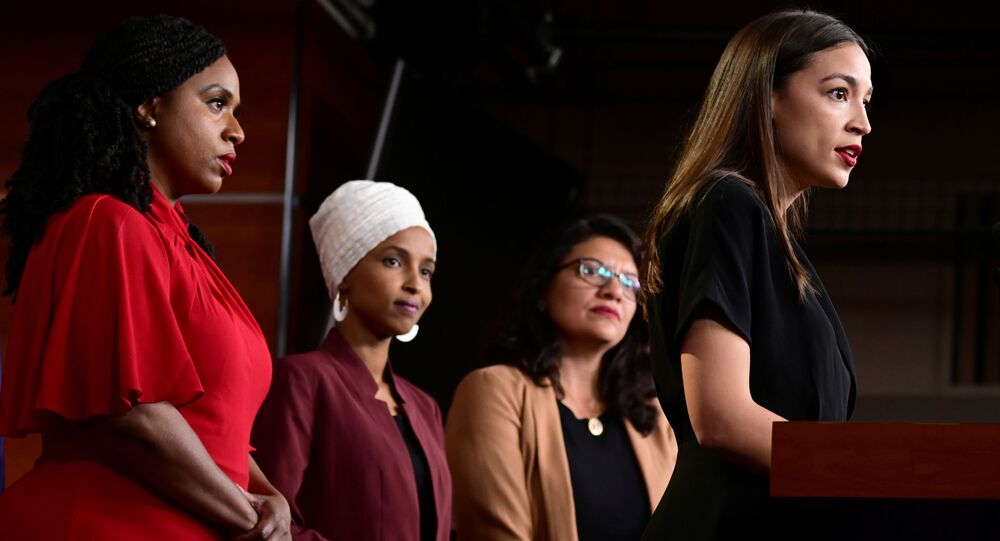 The US President blasted his congressional detractors as “inexperienced” and “not very smart”, insisting that their actions do not bode well for the United States.

US President Donald Trump has delivered a fresh Twitter broadside against a group of four Democratic congresswomen known informally as “The Squad” which is comprised of Reps. Alexandria Ocasio-Cortez, Ilhan Omar, Ayanna Pressley and Rashida Tlaib.

In his tweet, Trump described the congresswomen as “a very racist group of troublemakers who are young, inexperienced, and not very smart” and whose opposition to ICE and Homeland Security is “bad” for the US.

The “Squad” is a very Racist group of troublemakers who are young, inexperienced, and not very smart. They are pulling the once great Democrat Party far left, and were against humanitarian aid at the Border...And are now against ICE and Homeland Security. So bad for our Country!

​Trump’s message elicited a mixed response on social media, with the Squad’s supporters and enemies both getting involved.

The “squad” stands against all that is great about the United States. These new congresswomen would destroy our country if they ever had any real power.

The Squad would destroy you in a debate Mr President.

The squad is a detriment to America. Those horrible people are want attention and want to change America.

The president’s tweet comes shortly after Ocasio-Cortez issued a call for a “9/11-style commission” to review the Trump administration's policy that leads to the separation of migrant families on the country’s southern border.

This was far from the first episode in the ongoing exchange between Trump and the “Squad”, as the latter previously declared that it is time to impeach the president over his actions and statements, accusing him of promoting the "agenda of white nationalists".

Trump has lashed out against the congresswomen on a number of occasions, advising the congresswomen to "go back and help fix the totally broken and crime-infested places from which they came" and accusing them of being unpatriotic.