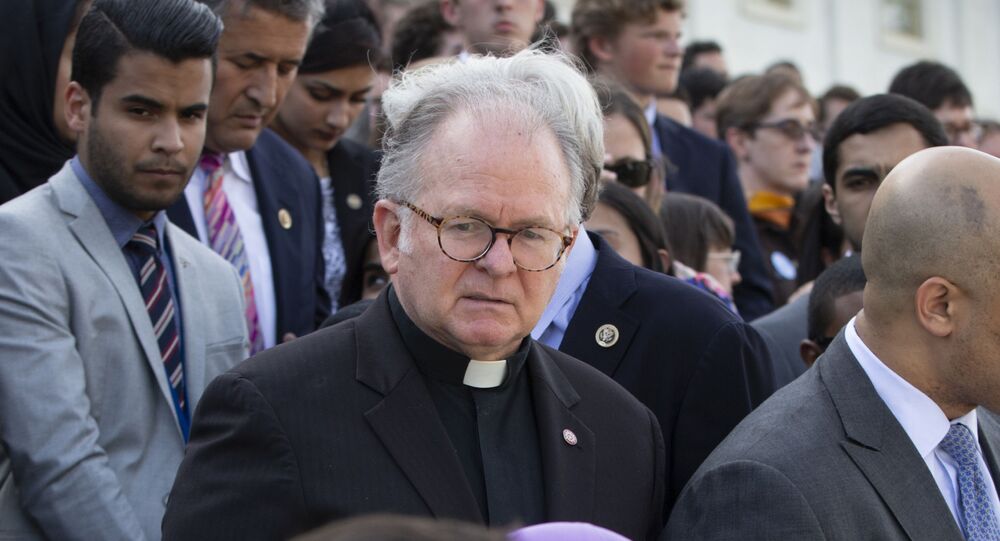 The US House of Representatives has always been a place of heated debates but the pressure peaked after US President Donald Trump lashed out at four progressive Democratic Congresswomen, telling them to go back where they came from. The chamber priest says that he wrote his prayer when the House voted to condemn Trump.

Jesuit reverend Patrik Conroy, who has been the House Chaplain since 2011, recalled the old Catholic rite of exorcism, supposed to cast out evil spirits from the possessed, with an opening prayer, CNN reports.

“This has been a difficult and contentious week in which darker spirits seem to have been at play in the people’s house. In your most holy name, I now cast out all spirits of darkness from this chamber, spirits not from you”, the reverend said from the congressional rostrum, closing his eyes and raising his hands.

House Chaplain Pat Conroy’s opening prayer: "This has been a difficult and contentious week in which darker spirits seem to have been at play in the people's house. In Your most holy name, I now cast out all spirits of darkness from this chamber, spirits not from You." pic.twitter.com/DleRYUtLWV

​In his prayer, Farther Conroy took aim at “the spirit of discouragement”, “the spirit of petty divisiveness which clouds the sense” as well as “any sadness brought on by the frustration of dealing with matters detrimental to the honorable work each member has been called to engage in”.

He also put in a word for God’s “servants” in the House, praying to “renew the souls of all in this assembly”.

“May your spirit of wisdom and patience descend upon all so that any spirit of darkness might have no place in our midst”, Conroy said.

The priest later revealed to CNN that it was no coincidence that the prayer was reminiscent of the exorcism rite. He admitted that he wrote it on Tuesday when the House voted to condemn the US president over his Twitter rant about the so-called progressive Democratic Congresswomen, also known as “The Squad”: Ilham Omar (Minnesota), Alexandria Ocasio-Cortez (New York), Rashida Tlaib (Michigan), and Ayanna Pressley (Massachusetts). In his tirade, later branded racist, he told the women to go back to fix their “broken, crime-infested” countries of origin before teaching how to run the US.

"I was on the House floor on Tuesday and to me, it felt different than other days. It felt like there was something going on beyond just political disagreement. The energy of the House was very off. No one was relishing what was happening”, the priest said, noting that his message was non-partisan and he was not “picking sides”.