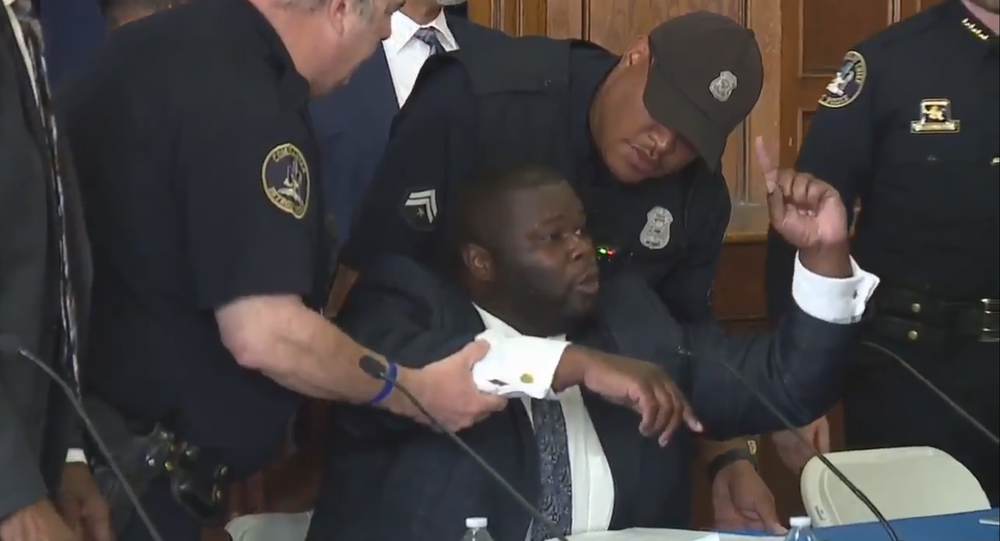 A Detroit Charter Revision Committee meeting resulted in the arrest of a city official after a heated exchange between board members reached the point where the board chair felt it necessary to have a representative forcibly removed and escorted to jail.

Detroit Police Commissioner Willie Burton, representing District 5, asserts “Gestapo tactics” were used against him on July 11 for simply “trying to speak during a meeting,” according to his interview with The Detroit News (TDN).

The situation came about during a board discussion concerning the use of facial recognition technology around the city of Detroit. Ten board members, as well as members of the community, were in attendance on Thursday.

TDN reports that things came to a head during the discussion after Detroit Police Commissioner Lisa Carter was sworn in as the board’s chair for a second term. Burton, who claims that he was not given an appropriate amount of time to speak during meetings, asked the chairwoman what she would do differently this time around. Carter responded claiming Burton was “out of order.”

"Out of order? No, I wasn’t out of order," Burton told TDN Friday. "I was acknowledged by the chair, and I asked her what she would do differently that she didn't do before. The next thing I know, I'm being arrested."

A series of clips from the meeting have since surfaced online, showing part of the exchange and the subsequent removal of Burton at the direction of Carter.

“This has disenfranchised 100,000 voters that I represent in the fifth district,” Burton can be heard saying in the first clip.

Things got heated tonight at the. detroit Police Commissioners meeting. Commissioner Willie Burton arrested after the Chair asked him to be removed. pic.twitter.com/ynuw0OPeEQ

The second segment shows local residents at the meeting calling for the release of Burton, as he is escorted out of the board room. Many in attendance were wearing masks as a form of protest against recent proposals pertaining to facial recognition software.

At two points in the clip, someone on the other side of the exit slams the doors closed, preventing people from leaving the room. An elderly woman is knocked back in the first instance.

The Chair told the commissioner his time for comment was over. He said he wasn’t done, that’s when she asked him to be removed pic.twitter.com/QuKyxiJJ1m

The final recording shows one masked man asserting that Burton’s removal was unacceptable as he was “elected by the people.”

A few protestors were at the meeting wearing masks protesting the use of facial recognition. We will the whole story tonight @wxyzdetroit and @tv20detroit hear from Commissioner Brown and a community activist who’s against facial recognition pic.twitter.com/JVV0Pp8IfT

The Detroit Police Commission is a volunteer-based, 11-member board made up of seven civilians elected by their districts and four appointed by the city mayor. Those appointed are tasked with overseeing the Detroit Police Department with “broad supervisory authority” and communicating issues relevant to their constituents.

"I was carried out of a police board of commissioners meeting and thrown down onto the floor in the district I represent. Those were District 5 residents in that meeting; when they saw their commissioner being carried out, they were concerned," Burton told TDN.

A fellow commissioner is said to have followed authorities to the Detroit Detention Center and promptly posted Burton’s $100 bond, but Burton is due back in court on July 25 on charges of disorderly conduct. TDN reports the District 5 representative, if found guilty, could face any combination of up to 90 days in jail and a maximum $500 fine.

Despite his personal legal situation, Burton stressed that he will continue to voice his concerns over the reliability of facial recognition software in the hands of law enforcement.

"What happens when this technology misidentifies a person of color that doesn't have the resources for a good legal defense? These are serious issues," the commissioner concluded to the outlet.

Contracts, ‘Lack of Oversight’ Give Cops ‘Latitude to Protect Themselves’ From Justice