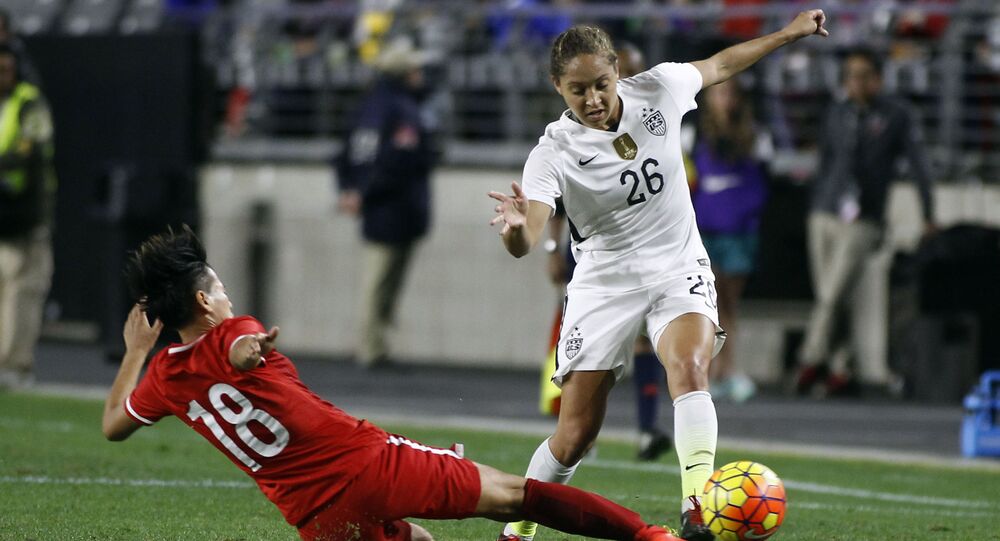 Soccer player Jaelene Hinkle has been dubbed the top left defender in the US women’s team, with media claiming she “helped her team win the NWSL championship”.

Jaelene Hinkle, a star for the North Carolina Courage professional  women's soccer team, and one of the best players in the US, was not selected for the national team, which celebrated a historic win on 7 July in the Women’s World Cup, prompting questions, writes The Washington Times.
Many have wondered if the snub had anything to do with the player’s refusal to promote the LGBT lifestyle, reportedly on Christian moral grounds.

​The Washington Times points out that after Hinkle wasn’t called up, “coach Jill Ellis told reporters that the decision was 'solely based on soccer', an explanation greeted with widespread scepticism.”

In June The Irish Times had written that Hinkle was “the finest left-back in the NWSL” and would likely have felt like “a fish out of water” on the women’s national team, some of whose biggest stars are openly lesbian.

The soccer player has never shunned questions regarding her conservative religious convictions. Back in 2015, Hinkle openly spoke out against a US Supreme Court’s ruling that legalised same-sex marriage, posting her stance on Instagram.

Hinkle spoke on the “700 Club,” the flagship television programme of the Christian Broadcasting Network, opening up on the issue, adding she had felt it wasn’t her job to wear that jersey.

Shortly after, Hinkle was booed at by some fans waving rainbow flags when her team played against the Portland Thorns in Portland, Oregon.

Twitter users reactions were split, with some openly supporting the player and her staunch Christian beliefs:

Article makes it sounds like she’s disruptive because of her beliefs, when it appears instead that problem was team’s insistence she advertise their beliefs for them. Problem isn’t her Christianity (Jesus went to the sinner), but their secular religion’s intolerance.

The left is all about tolerance inclusion as long as they’re the ones being tolerated and included. Not so much when they’re asked to tolerate and include others.

👍🙏 Jaelene Hinkle for sticking to your convictions among opposing ideas. In the grand scheme of things, soccer is da'bomb, but not as awesome as peace of mind. You have a right to be on the team and if Ellis is wrong, the truth will prevail, patience, and stay the course.

​Other users deplored Hinkle’s judgement and believed the US team was better off without her:

Doesn’t sound like a “religious clash” as much as her not wanting to participate in wearing the team uniform. The team wanted to show support for fans who’ve been marginalized for years. It’s not like they were trying to force her into a same-sex relationship. She’s no martyr.

No time to babysit fundamentalists of any kind. Good riddance! The time won the World Cup without her. I love, Dunn and our US women’s soccer team even more now.

I mean. They won and out scored their opponents like 25-3 or something like that. I think they did just fine without her.

​In the interview with the “The 700 Club,” Hinkle stated:

““I’m essentially giving up the one dream little girls dream about their entire life. It was very disappointing. If I never get another national team call-up again then that’s just a part of [God’s] plan, and that’s OK."