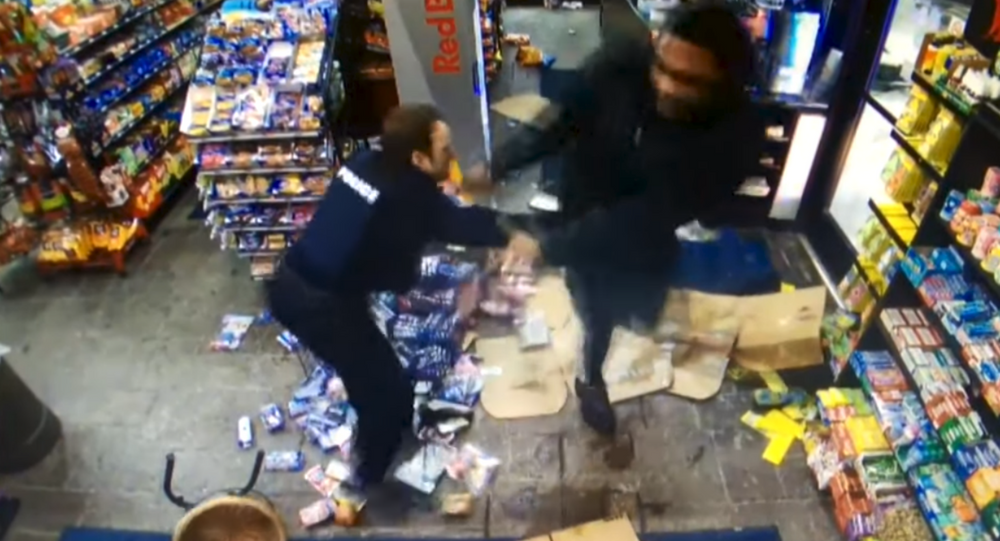 Recently released surveillance footage shows the moment that Malik McDowell, a former defensive lineman for the National Football League’s Seattle Seahawks, violently wrestled with a Michigan law enforcement officer after being struck by a stun gun during a February 2019 altercation.

Obtained and released by tabloid website TMZ, video of the incident shows an officer with the Lathrup Village Police Department initially confronting McDowell just outside of a Marathon gas station in Southfield, Michigan, for speeding and swerving.

Seconds after the officer approaches McDowell, he is instructed by the athlete to call his supervisor to the scene. For several moments, the pair go back and forth, with the unidentified officer requesting that McDowell fork over his driver’s license, registration and insurance card and McDowell questioning the officer’s reasoning for the traffic stop.

Video shows that McDowell came onto the officer’s radar after he was spotted speeding and losing control of his vehicle prior to pulling up to the gas station’s entrance. Appearing to grow tired of the officer’s requests, McDowell is eventually seen ignoring commands to stay put inside his vehicle.

It’s once McDowell manages to get past the officer and into the station’s convenience store that things escalate. Inside, the officer is heard repeatedly commanding McDowell to place his hands behind his back as he struggles to get a grip on the 6-foot-6, 300-pound football player.

Although McDowell eventually sits on the ground, he’s not down for long. The officer deploys his department-issued stun gun on McDowell for not complying with his orders, but the former defensive tackle completely disregards the electrical prongs and attempts to rush the officer.

The not-so-dynamic duo grapple with one another for several seconds, knocking over stands and various convenience store items. Throughout the scuffle, McDowell is repeatedly heard requesting for the officer’s supervisor to be called to the scene.

“You’re not gonna shoot me. I need a supervisor. I need your supervisor,” McDowell is heard saying. McDowell continues to make his request even after five additional officers arrive on the scene to take him into custody.

According to the Detroit Free Press, the manager of the Marathon gas station has indicated that the tussle caused “heavy, extensive damage” that cost upwards of $1,500.

The altercation ended with McDowell being charged with driving while impaired, driving with a suspended license, obstructing justice and assaulting a police officer.

However, the list of charges doesn’t stop there for McDowell, who was released from the Seahawks in 2018 after suffering serious injuries in an ATV mishap. Local media reports indicate that the athlete is also facing charges for a separate April 2019 incident regarding a stolen vehicle.