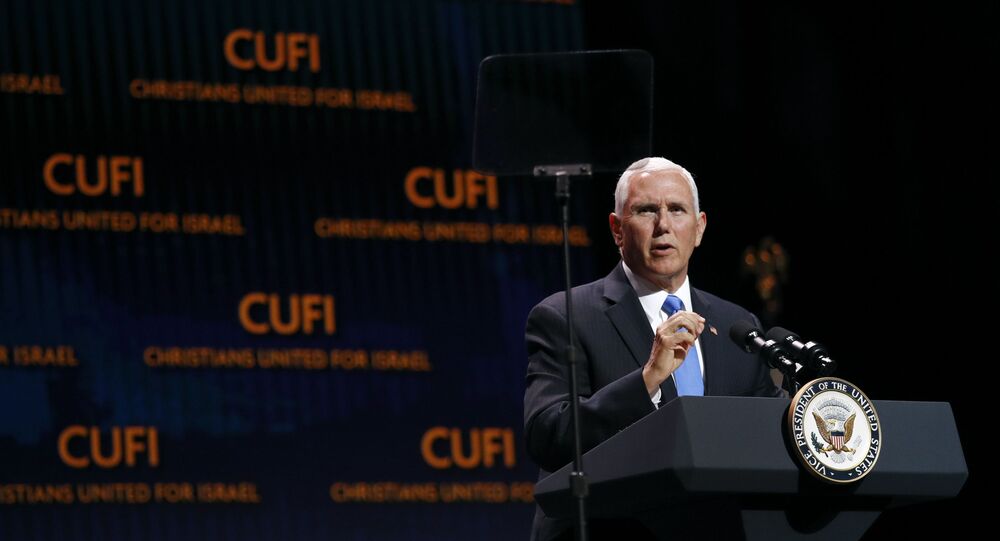 US Does Not Seek War With Iran, But Will Not Back Down - Pence

The US and Iran were recently on the verge of armed conflict after Tehran downed an American drone that had allegedly violated its airspace. US President Donald Trump stopped the planned retaliatory strike, but Washington unleashed new sanctions against Iran, continuing its efforts to put pressure on the country.

US Vice President Mike Pence stated in a speech to the advocacy group Christians United for Israel on 8 July that Washington doesn't seek war with Iran, reiterating earlier US statements claiming that the country wants to hold negotiations with Tehran.

At the same time, he noted that the US won't "back down" from its efforts to prevent the country from obtaining nuclear weapons, something that Tehran itself repeatedly ruled out doing. Pence further said that although the US is hoping to reach a peaceful resolution to its disagreements with Iran, the American military will be ready if Washington's personnel or interests in the region are threatened by the Islamic Republic.

Pence slammed as "disastrous" the Joint Comprehensive Plan of Action, also known as the Iran nuclear deal, which was signed in 2015 and limited the Islamic Republic’s nuclear programme in exchange for lifting sanctions. He also vowed that no new deal would enable Iran to get "pallets of cash".

Tensions between the US and Iran escalated last month after Iranian air defences downed a reconnaissance unmanned aerial vehicle (UAV) flying through the Strait of Hormuz. Tehran said that the drone had violated its borders and had been repeatedly warned prior being downed, adding that it had spared a P-8 Poseidon spy plane that had also violated the country's border on the same day.

The US claims that its UAV was flying over neutral waters and was preparing a retaliatory strike over the drone incident – a measure which was stopped by President Donald Trump just minutes before it was launched. Instead, the US later imposed a new set of sanctions on Iran, including on the country's Supreme Leader Ali Khamenei and those closest to him.

The downing of the drone was preceded by US efforts aimed at bolstering its military presence in the Middle East in order to deter an alleged Iranian threat. Washington sent additional troops, along with a regiment of B-52 bombers, an aircraft carrier strike group, as well as Patriot missiles to the region. The US president also repeatedly warned Iran against attacking American forces or allies, despite Tehran repeatedly stating that it doesn't seek war with Washington.