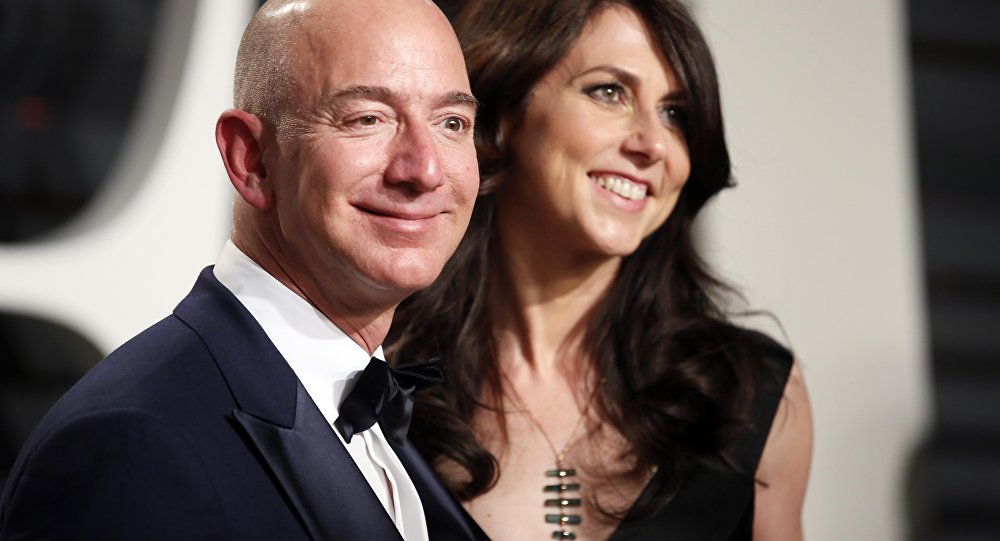 MacKenzie Bezos officially split with Amazon CEO Jeff Bezos after a Washington state judge signed off on the divorce in an arrangement that grants her 19.7 million shares of Amazon.

Newly divorced MacKenzie Bezos is being bombarded with online dating proposals since news broke of her divorce with Amazon CEO Jeff Bezos, which was officially sealed on Friday in a settlement granting her shares of Amazon valued at more than $38 billion, according to Bloomberg.

MacKenzie’s April tweet announcing her divorce with the world's richest man set social media on fire, with many replying with dating proposals.

You're better off without him. You deserve a man who truly appreciates you, supports you, and posts good memes about Beto being a furry and such.

DM me im not evil

Others, aware of her involvement in charity, tried to elicit the wealthy divorcee’s sympathy and hoped for donations, listing charitable causes.

Wanna help save the world? https://t.co/OnWKwdvvBD

I have to say one tweet and 42,700 followers is pretty impressive efficiency.

By the way - if you've got a spare $20K floating around fancy giving a single dad an interest-free loan? I'll pay you back in 12 months. Cheers.

You are amazing. My most recent endeavor is to transform a NYC mansion into a Spa type atmosphere for abused women to regain spirit, health & confidence. I'm in no such way implying your experiences in any form relate but however my personal experiences do. GoFundme LoriDyer

You know what helps you feeling useful and give peace...please donate to me for my student loan debt and my unpaid rent as I struggle working PT n FT school...call me

​MacKenzie, 49, who had no prenuptial agreement with the billionaire, could potentially have been entitled to half his fortune.

The award-winning novelist has already reportedly pledged to give at least half of her fortune to charity and agreed to surrender all of her interests in the Washington Post and Blue Origin to Jeff to Jeff, reported Bloomberg.

Her ex-husband will keep most of the couple’s shares, representing roughly 12 per cent of Amazon's stock, equal to around $114.8 billion.

MacKenzie Bezos is expected to receive a 4 per cent stake or 19.7 million shares in the e-commerce giant, becoming the third-richest women in the world, trailing only behind L'Oreal heiress Francoise Bettencourt Meyers and Walmart heiress Alice Walton.

According to Bloomberg she will become 22nd on its Bloomberg Billionaires index, a ranking of the world’s 500 richest people.

MacKenzie married Jeff prior to the founding of Amazon and was even one of the company's first employees.

Their union collapsed after news emerged in January that Jeff had been allegedly cheating on his wife with former television anchor Lauren Sanchez, with the story exploding after text messages between the two were published by multiple media outlets.