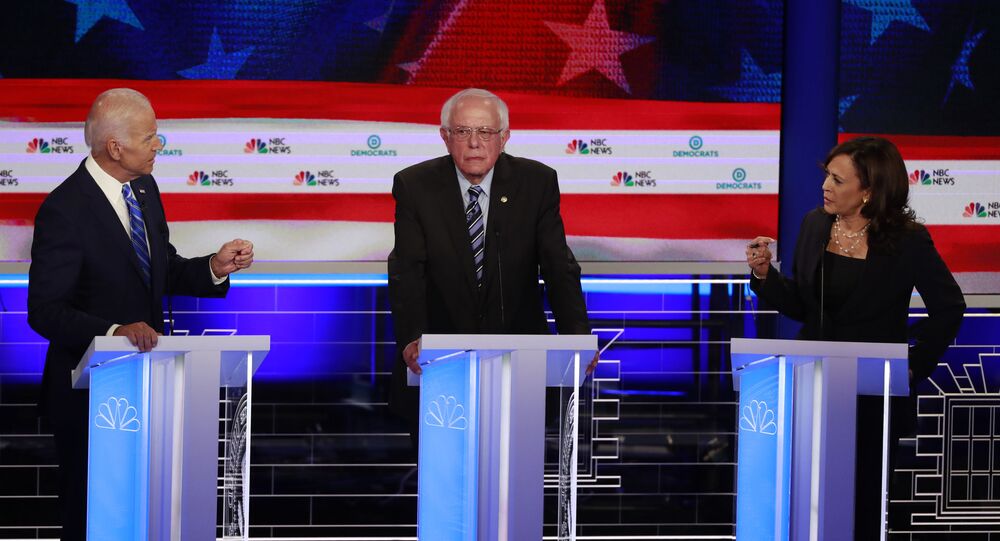 Biden, Harris Numbers Too Close to Call in US Democratic Primaries - Poll

WASHINGTON (Sputnik) - US Democratic presidential candidate Joe Biden hit his lowest numbers in the US presidential primary race with Senator Kamala Harris trailing behind him by just two percent, following the latest round of primary debates, a Quinnipiac University poll revealed.

Biden has the support of 22 percent of voters while Harris secured 20 percent, according to the poll published on Tuesday.

In June, a Quinnipiac poll had Biden enjoying a 30-percent support, while Harris was at 7 percent.

"Round 1 of the Democratic debates puts Senator Kamala Harris and former Vice President Joe Biden on two different trajectories, as support for Harris surges but continues to slip for Biden. Biden's once commanding lead has evaporated", agency polling analyst Mary Snow said in a news release accompanying the survey.

The most recent poll was conducted from 28 June to 1 July among 554 Democrats and Democratic-leaning voters. The margin of error is 5 percentage points.

Last week, Biden in his address concentrated on defending his civil rights record against attacks on his long career as a champion of racial equality, reminding the audience that he served under the United States’ first black president, Barack Obama, and reminiscing over his support for the civil rights movement during 36 years in the US Senate.

On 13 June, the Democratic National Committee (DNC) announced that 20 candidates met the debate criteria by registering at least one percent of support in three polls from recognized organizations or campaign contributions from 65,000 unique donors, including at least 200 donors from 20 different states.