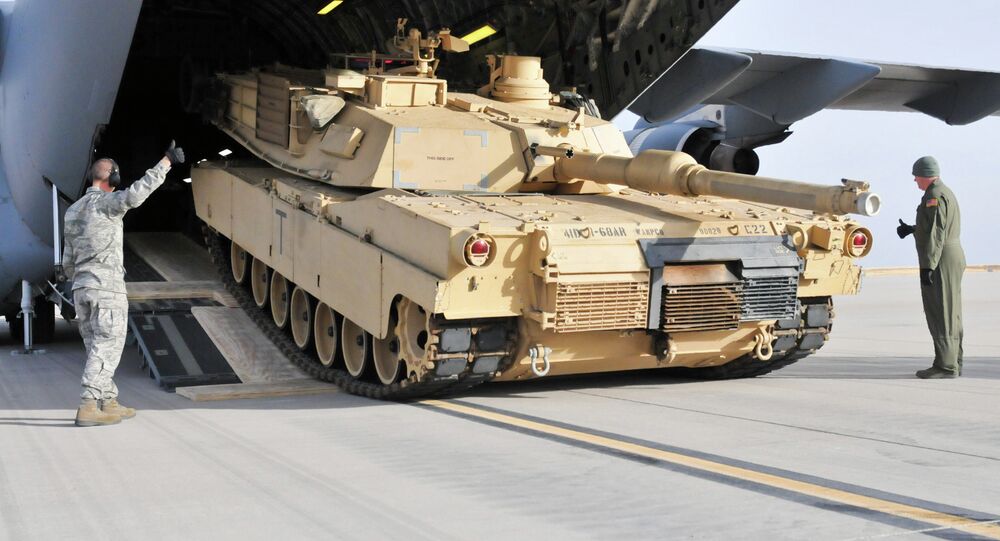 At least two M1A1 Abrams tanks from the US Army have arrived in Washington, DC, ahead of US President Donald Trump's Fourth of July Celebration on Thursday.

According to the Associated Press, the two battle tanks, along with four other US military vehicles, were spotted on the southeast edge of the nation's capital.

The M1A1 tanks and other military hardware are said to be guarded by military police and arrived Monday via freight train from Georgia's Fort Stewart. Trump informed reporters Monday that the the tanks and other other military equipment will be placed outside the Fourth of July event, but did not elaborate on their exact positioning or intended use.

In a retreat from tradition, the US president announced on February 24 that the nation's capital would be "having one of the biggest gatherings" it has ever seen.

Trump's address is set to take place at the Lincoln Memorial. ​

Prior to this year, no US president in recent history has made themselves part of the Fourth of July event in Washington, DC.

"We don't have all of those logistics nailed down at this point," US Park Police Chief Robert MacLean told DC outlet NBC News4 earlier on Monday.

Last month, House Majority Leader Steny Hoyer, Rep. Betty McCollum and Rep. Raul Grijalva penned a letter to the president, urging him to call off his plans to turn the event into a "partisan campaign rally" that could potentially harm attendees and put a strain on city finances.

Mayor of Washington, DC, Muriel Bowser was also opposed to the president's taking part in the event, telling the Washington Post in May that the historic event is a "well-oiled machine." Bowser clarified that despite Trump's departure from tradition, she will not allow his appearance, added personal security detail or any  other associated factors to "impact neighborhood safety."

Back in 2018, Trump attempted to organize a separate, military-centered parade, involving armored vehicles, aircraft flyovers and troops dressed in military uniforms of the past and present.

The local politicians who run Washington, D.C. (poorly) know a windfall when they see it. When asked to give us a price for holding a great celebratory military parade, they wanted a number so ridiculously high that I cancelled it. Never let someone hold you up! I will instead...

The event was slated for November 10, 2018, but was ultimately canceled in August of that year.