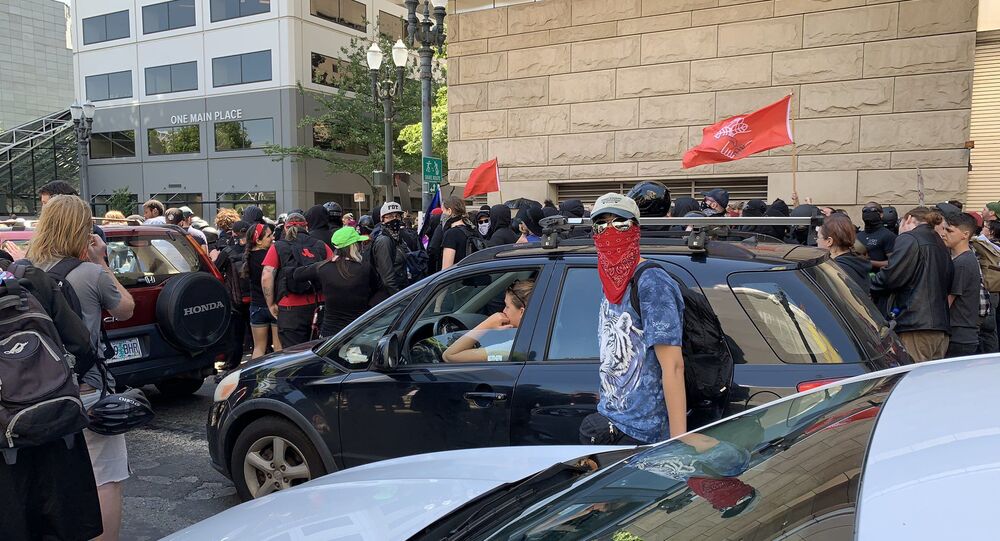 Several protesters and anti-protesters clashed out on the streets of downtown Portland on Saturday with the violence affecting police officers of the city.

Tensions between protestors from the Proud Boys, an organization that admits only men and is notorious for street fights, the "HimToo Movement," a movement against false rape allegations organized by conservative activist Haley Adams, and counter-protestors from Rose City Antifa escalated on Saturday, with representatives from both parties getting violent.

Some participants were reported throwing milkshakes mixed with quick-drying cement, raw eggs and pepper spray at others, and the gatherings were deemed a "civil disturbance and unlawful assembly" by the Portland PD.

Several people hit with bear spray, another person being hit over the head. #pdxprotest pic.twitter.com/YbWqM0Z9oJ

Police just cleared a group from the corner of Sixth and Morrison ... firing less-lethal rounds of some sort. Pepper spray smell in the air. pic.twitter.com/Wn8vPXglw3

The crowd surrounded some people, at least 1 milkshake was thrown. Another person jumped onto the grounds of the Pioneer Courthouse and yelled at by police to get away. pic.twitter.com/a8OSAXyLa3

"During today's events, there were multiple assaults reported, as well as projectiles thrown at demonstrators and officers," the police said in a statement. "There were also reports of pepper spray and bear spray being used by people in the crowd. Officers deployed pepper spray during the incident. There were reports of individuals throwing "milkshakes" with a substance mixed in that was similar to quick-drying cement. One subject was arrested for throwing a substance during the incident."

At least one more incident was reported involving Andy Ngo, a conservative writer, who appeared to have been attacked by antifa members.

The demonstrations came nearly a year to the day after Patriot Prayer and antifascist activists engaged in violence last June 30. Portland police declared that clash a riot.