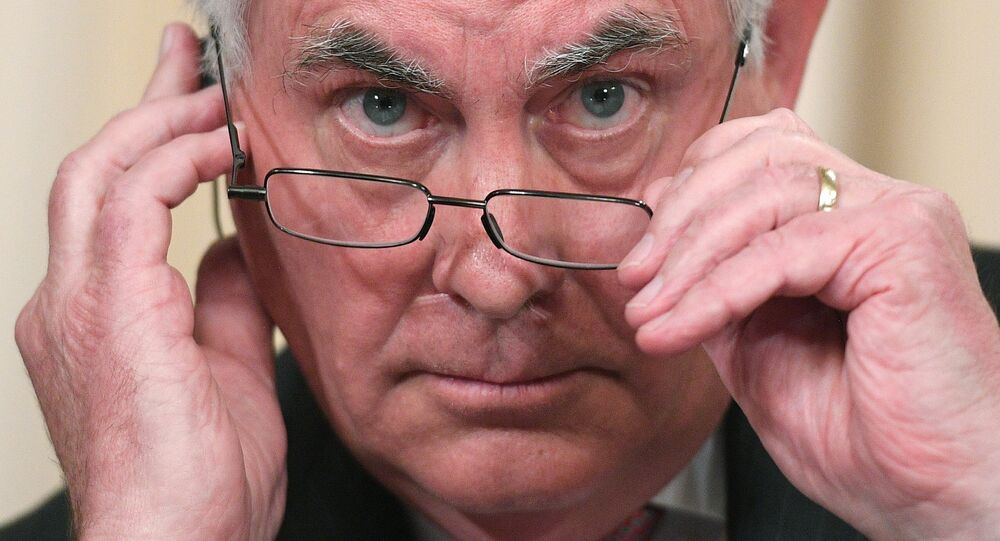 WASHINGTON (Sputnik) - Former US Secretary of State Rex Tillerson described an encounter at a Washington restaurant in which White House Adviser Jared Kushner conducted foreign diplomacy for the Trump administration behind his back, a transcript of Tillerson's congressional hearing revealed on Thursday.

Tillerson, who was fired by Trump in March 2017, recounted an awkward encounter with Kushner and Mexican Secretary of Foreign Affairs Luis Videgaray during the hearing.

The former secretary of state said he "could see the colour go out" of Videgaray's face when Tillerson greeted them at their table.

"I smiled big, and said, 'Welcome to Washington,'" Tillerson recalled. "I said, 'I don’t want to interrupt what y’all are doing. ... Give me a call next time you're coming to town.' And I left it at that."

Tillerson also said he later found out that the Mexican foreign secretary was operating under the assumption that everything he talked about with Kushner had been run through the State Department.

On Tuesday, Kushner unveiled part of the Trump administration's plan to end the Israeli-Palestinian conflict.

Kushner said the peace plan aims to unleash the economic potential of the West Bank and Gaza by promoting capital investments, improving education and health care and enhancing governance structures.

For decades, Palestinians have sought recognition of an independent state of Palestine on the Israeli-occupied West Bank and Gaza Strip. The Israeli government has refused to recognize Palestine as an independent political and diplomatic entity and continues to build settlements in the occupied areas, despite objections from the United Nations.

As Money Dries Up For Palestinians, Are They In a Position to Say No to Jared Kushner Peace Deal?