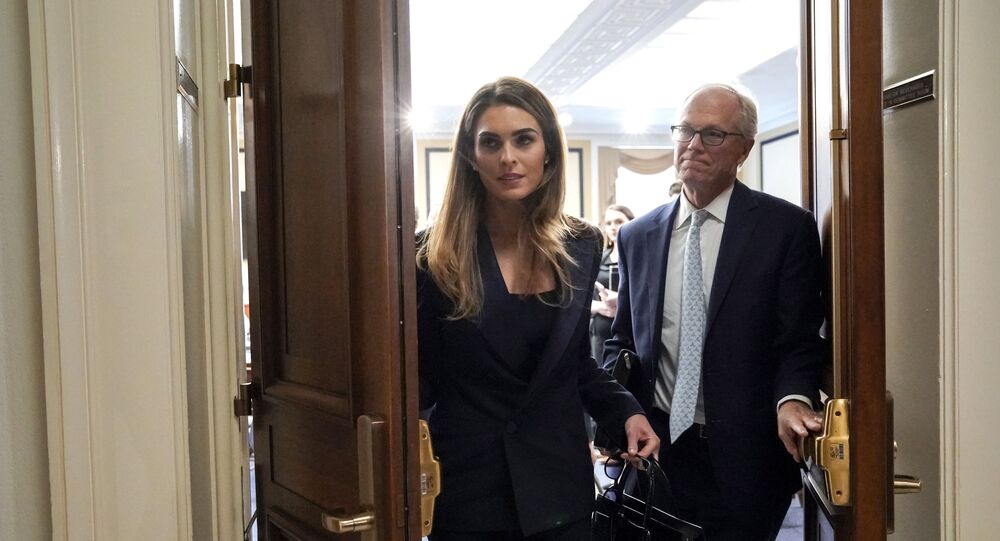 Hicks, who was a witness in former Special Counsel Robert Mueller’s investigation into alleged ties between Trump’s 2016 campaign and Russia, is the first Trump official to testify on the question of Trump’s potential obstruction of justice, which was reported on in Mueller’s final report, delivered in March.

According to the committee’s transcript, White House lawyers prevented Hicks from answering questions 155 times during the interview, claiming “absolute immunity.”

According to a Thursday press release from House Democrats, “these interruptions are a gimmick designed to interfere with the Committee’s investigation.”

“The Trump Administration’s claim of ‘absolute immunity’ has no basis in law. The courts have already decided that ‘absolute immunity’ is ‘entirely unsupported by existing case law’ and ‘virtually foreclosed’ by the Supreme Court … The President’s lawyers made these bogus immunity claims in order to stall for their boss, to block witness testimony, and to avoid invoking executive privilege where the privilege clearly no longer exists, if it ever did,” the release states.

When asked about specific persons who were involved in the “strategy of the impact of Russia” and the “issuance of the WikiLeaks effort,” Hicks noted that the “campaign didn’t have a Russian strategy.”

“There was an effort made by the campaign to use information that was publicly available, but I'm not aware of a Russian strategy, communications or otherwise,” she added.

According to Mueller, Russian intelligence officers, who were part of Russia's Main Intelligence Directorate of the General Staff, or GRU, launched a “concerted attack” on the US “political system,” allegedly using “sophisticated cyber techniques” to hack into computers and networks used by Hillary Clinton’s Democratic Party campaign. The emails retrieved during the hack were then published by WikiLeaks on July 22, 2016, just before the 2016 Democratic National Convention.

According to the Democrats’ Thursday press release, Hicks was “unapologetic about the Trump Campaign’s use of hacked materials released by WikiLeaks, defending the campaign as using ‘publicly available information,’” and she also noted that the Trump campaign felt “relief” when the Clinton’s hacked emails were leaked.

Hicks “agreed with the assessment of the intelligence community that the Russians had attacked the 2016 election by aiding the candidacy of President Trump and hurting that of Hillary Clinton,” according to the press release, also saying she would not accept “foreign oppo[sition] information from a foreign government” and would report it to be the FBI if she deemed it credible.

In addition, Hicks was blocked by White House lawyers from answering questions about the firing of former FBI Director James Comey and Trump’s instructions to former Trump campaign manager Corey Lewandowski to deliver a message directing then-Attorney General Jeff Sessions to “unrecuse” himself from the investigation of Trump’s campaign, an action Hicks described as “odd.”

“Within hours of the President's meeting with Lewandowski on July 19th, 2017, the President gave an unplanned interview to The New York Times in which he criticized Sessions' decision to recuse from the Russia investigation. The President said that, quote, ‘Sessions should never have recused himself, and if he was going to recuse himself, he should have told me before he took the job and I would have picked somebody else,’ close quote.” Hicks said during the testimony.

“Sessions' recusal, the President said, was very unfair to the President. ‘How do you take a job and then recuse yourself? If he would have recused himself before the job, I would have said, Thanks, Jeff, but I can't, you know, I'm not going to take you,’ close quote. It's extremely unfair, and that's a mild word to the President,” Hicks added.

Is Russiagate the Same as Watergate? House Judiciary Still Mulling Over Mueller!

Mueller Resigns but the Russiagate Conspiracy Hoax Lives On

‘Everything is Flipped’: Russiagate Scandal Will ‘Backfire’ on Dems in 2020