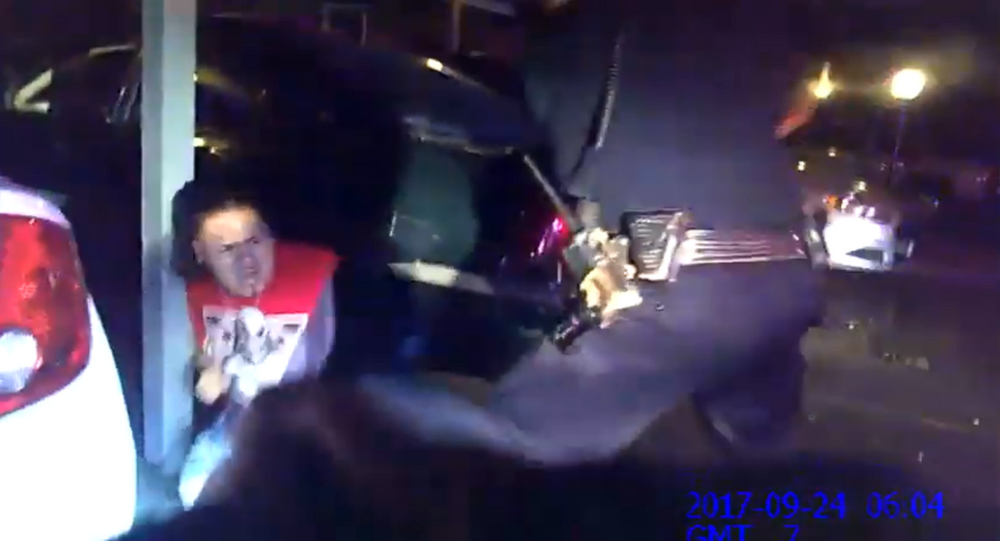 California’s Placer County District Attorney’s Office released video evidence this week showing the violent September 2017 arrest of Emilio Perez-Chavez, who was apprehended by officers on suspicion of driving under the influence.

A total of five videos were released to the public after the DA’s office was given approval to do so  by a court on Wednesday. The video release includes footage from three responding officers’ body cameras, as well as dashcam and cell phone videos.

The release came one month after a Placer County jury acquitted Rocklin Police Officer Brad Alford of all charges, which included assault with a deadly weapon, assault and assault by a public officer. Alford had pleaded not guilty to all charges.

Local media reports indicate that the confrontation between police officers and Perez-Chavez unfolded after he pulled into the parking lot of an apartment complex. Recording of the violent incident shows officers with guns drawn, ordering Perez-Chavez to exit his vehicle with his arms raised.

“Driver, open up the door and get out with your hands up. If you don’t want to get shot, you better keep your hands up,” Alford tells Perez-Chavez before his fellow responding officers tell the driver to exit the car multiple times.

“Put your hands up and get out of the car. I’m going to shoot you if you don’t f**king start complying,” Alford is heard saying. “Get out of the f**king car.”

After getting no response from Perez-Chavez, Alford responds, “Alright, I’ll do it then.” Seconds later, Perez-Chavez is seen exiting the car, facing toward the officers on the scene.

Although Perez-Chavez appears to be calm and non-aggressive, Alford charges toward him, instructing him to get on his knees while also beating him with his department-issued baton. Perez-Chavez is repeatedly hit by Alford as he yells out in pain.

At one point during the incident, a fellow officer is heard telling Alford to stop hitting Perez-Chavez with the baton. “Stop, stop, stop. Tase. Tase, tase. We’ll tase,” the officer says as Alford continues with the baton.

By the end of Alford’s attack, Perez-Chavez was left with a broken arm and fingers and a fracture on his right leg, according to local outlets. Per the department’s account, his injuries were not life-threatening.

Alford was arrested two days after the incident after officers who were present at the scene reported his behavior to the department.

“While our office disagrees with the outcome, we respect the Jury’s verdict. We also understand that proof beyond a reasonable doubt is a high burden to meet,” the DA’s office said in a statement regarding Alford’s acquittal.

“Our office does, however, stand by our investigation and continues to believe that the prosecution in the case was appropriate given the video evidence that was presented to the Jury.”

“We believe the attached videos speak for themselves. It remains clear to our office that Alford’s conduct was excessive and certainly not consistent with the conduct of other law enforcement officers in our County,” the statement added.

According to the Sacramento Bee, Alford is still employed by the Rocklin department; however, he remains on administrative leave.