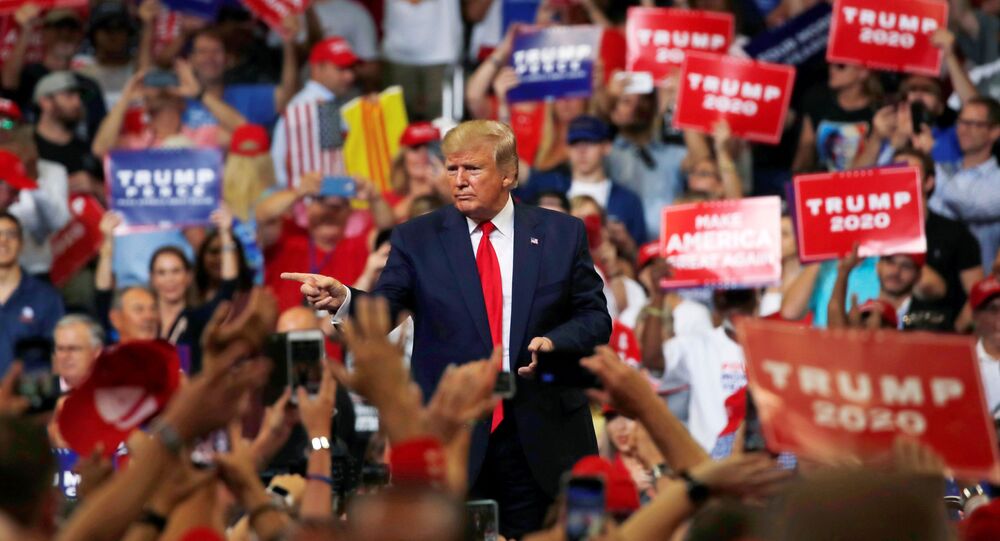 US President Donald Trump has kicked off his campaign in Orlando, as he hopes to keep his foothold in Florida, a key swing state that delivered 29 electoral votes his way on election day, 2016.

Donald Trump formally announced that he's running for a second term in office in 2020 in a pitch he delivered on Tuesday evening to a gathering of 20,000 people at Amway Center in Orlando. Florida is a key swing state in a campaign that will see him battle against one of the 23 Democrats vying to run against him next year.

During his 75-minute speech, the president addressed a crowd that had donned “Make America Great Again” hats; they chanted “build the wall,” and waved signs that read “Four More Years”.

“Exactly four years ago this week I announced my campaign for the [office of] president . . . It turned out to be a great political movement,” Trump said.

“As long as you keep this team in place,”  Trump told thousands of supporters Tuesday, “our future has never looked brighter or sharper.”

Donald Trump said his administration would be attempting things that no one else has ever attempted before, as he launched his re-election speech with a teaser:

“Wait until you see some of the things you’ll hear about in the next few months,” adding “That’s what I say to my boss when he asks why I haven’t written anything in weeks.”

Democrats
Trump moved on to criticise “Crazy Bernie Sanders”, as he lambasted the Democrats as socialists, saying Americans don’t believe in socialism, “they believe in freedom”.

Trump said the Democratic party had become “more unhinged” than at any point in history.
Instead of bringing America together, Democrats want us “splintered” and “divided”, Trump said.

"A vote for any Democrat in 2020 is a vote for the rise of radical socialism and the destruction of the American dream," he told the crowd.

On immigration, Donald Trump blamed the Democrats for their inaction, as he deplored the current volatile situation at the border, claiming that undocumented immigrants are “pouring in”. He accused Democrats of seeking to legalise illegal immigration in order to boost their voting base.

"We believe our country should be a sanctuary for law-abiding citizens, not for criminal aliens," Trump told Florida supporters.
Donald Trump lambasted the Democrats over sanctuary cities, and moved on to the issue of the border wall, claiming 400 miles of it will be built by the end of next year.

​Trump said that the "American dream" itself is in peril from illegal immigrants.

​"Illegal mass migration brings in millions of low wage workers to compete for jobs, wages, and opportunities against the most vulnerable Americans, cutting off their path to the American dream," he said.

Trump's strongest card is the current health of the US economy, which he described as "the envy of the world."
Unemployment, one of the best indicators of an economy’s health, is low, said Trump, as he went on to claim the US has the lowest unemployment rate in the history of the country and impressive GDP growth.

​Unemployment figures stand currently at 3.8%, the lowest since 2000, and average hourly wages in the country continue to grow slowly, increasing by 2.7% compared to May of last year.

Moving onto the issue of the trade standoff with China, he pledged to negotiate a winning trade deal with the People's Republic, or walk away altogether.

Trump applauded the results of the tariffs slapped on China, saying they were working.

Companies are leaving China, he said.

In a jab at the media, Trump added “when the fake news tells you that you’re paying”, people shouldn’t listen.

“You’re not paying very much if you’re paying anything at all,” he said.

The Us President also vowed to tackle some key health challenges head-on, saying he would defend Medicare and Social Security for America's seniors, and always protect Americans with pre-existing conditions.

“We will come up with the cures to many many problems to many, many diseases including cancer,” Trump said.
He added: “We will eradicate AIDS in America and we’re very close”.

​By kicking off his campaign in Orlando, Trump hopes to keep his foothold in a state that delivered 29 electoral votes on his way to the White House in 2016.

In Florida, 54% of voters say they are better off financially than they were in 2016, while only 23% say they are worse off, a Quinnipiac University poll released Tuesday found. However, the same survey found that 44% of voters approve of the job he is doing, while 51% disapprove.