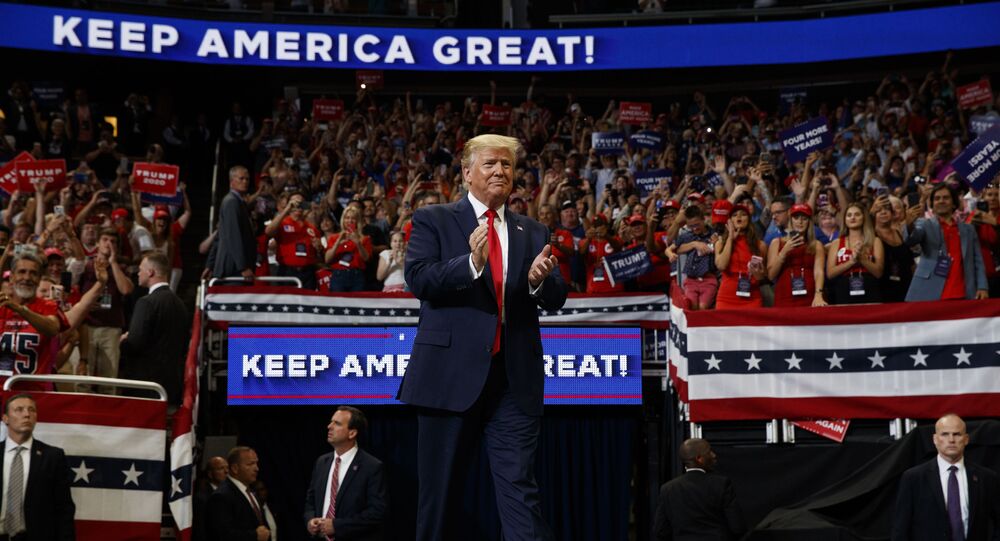 US President Donald Trump, who officially announced his re-election run for 2020 on Tuesday, made a show of presenting his new campaign slogan.

Trump’s 2016 run and the first two years of his presidency used the slogan: Make America Great Again. Commonly shortened to MAGA, the acronym is associated with Trump and his voter base, enabling social media users to interchangeably use the phrases. Trump reportedly briefly considered keeping MAGA as his slogan for the 2020 re-election campaign.

At the official 2020 campaign announcement rally in Orlando, Florida, however, Trump revealed a new catchphrase.

"We've made America great again, but how do you give up the number one, call it theme, logo, statement, in the history of politics for a new one?" Trump asked the audience during his Tuesday rally.

"Make America Great Again" was the best political slogan in history, but it's time for a change,” he admitted, before offering his new option.

The president then let the crowd decide which one they liked more. First, he proclaimed the old slogan, which was met with about 15 seconds of cheering.

“Not bad, not bad!” Trump reacted, before saying the new one. “Keep America Great!”

The new slogan was met with approximately 35 seconds of cheering, which evolved into prolonged “USA! USA!” chanting, making the audience’s preference unambiguous.

Trump’s campaign team had it all planned a long time ago, as trademark for the new slogan was registered on 18 January, 2017, two days before Trump was sworn into office, and 882 days before the Orlando rally, according to an application published by Yello’s Hunter Schwarz.

The trademark for KAG was filed on January 18, 2017, two days before Trump took office and subsequently filed to run for reelection https://t.co/1qmTke8hVs pic.twitter.com/klNfDxLZh6

​Speaking at the rally, Trump admitted that losing an election with the new slogan will make him ridiculed. Yet, he said he was too confident in his victory to seriously consider such a possibility.

"If I do it with a new theme... and if I lose, people are going to say 'what mistake that was'," he said at the rally. "But we're not going to lose so it's not going to matter."

In 2016, Trump surprised America and the world by winning the US presidency, as most political analysts expected long-known candidate Hillary Clinton to win. However, dirt leaked after thousands of emails were published online following a hacker attack on her email server effectively buried her campaign. In 2020, Trump will have to face 24 Democratic candidates and one Republican challenger.

Is "Deep State" Interference in the 2016 Election Undeniable?

Trump And Ocasio-Cortez Agree that Dems Are Divided, ‘Very Real Risk’ President Will Be Re-Elected