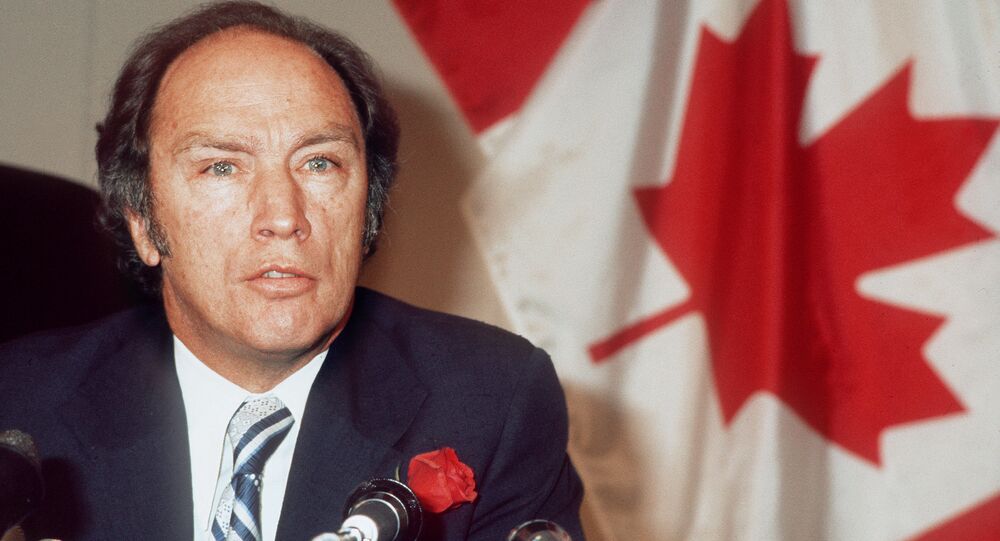 According to Canadian laws the file on the country’s former prime minister would have become available for the public to study in September next year on the 20th anniversary of his death, if it hadn't been destroyed decades ago.

The Canadian Press news agency has learned that a file on former Prime Minister Pierre Trudeau, compiled by the country's then spy agency, Royal Canadian Mounted Police (RCMP) Security Service, was destroyed back in 1989 and thus has not ended up in the national archives as it was supposed to be.

Following the dissolution of the RCMP Security Service after a series of scandals in the 1980s, its successor the Canadian Security Intelligence Service (CSIS) reviewed vast amounts of documents, inherited from the former spy agency. In that process, many of the files, including that of Pierre Trudeau, father of the current Prime Minister, Justin Trudeau, were purged for various reasons.

According to a response that The Canadian Press received from the CSIS, the file on Trudeau did not fit the criteria either to keep it in CSIS's active inventory or to preserve it in the national archives, where it would have become accessible to the public starting from September 2020 under Canadian law. The service didn't elaborate on what exact criteria the file on the former prime minister failed to meet.

"CSIS takes privacy considerations related to its work very seriously. We are committed to ensuring that the retention of information continues to be in compliance with all legislation and ministerial direction", the agency said.

CSIS was similarly tight-lipped, when it revealed seven years ago that files on two other former prime ministers, John Diefenbaker and Lester Pearson, had also been purged. At the time, the service cited the high level of suspiciousness on the part of security services during the days of the Cold War.

"That was a time when, as some historians argue, the security community occasionally saw threats that – hindsight being 20-20 – might seem exaggerated to us today", the news agency reported CSIS as saying.

The reported move to destroy the file on Pierre Trudeau infuriated the historians and authors of history books, interviewed by The Canadian Press, with one of them slamming the service for sending the prime minister's file "down an Orwellian memory hole". Steve Hewitt, a senior lecturer at the University of Birmingham, called the purging of the file "a crime against Canadian history" and said that such actions are "expected of an authoritarian state and not a proper democracy".

Pierre Trudeau held the post of prime minister from 1968 to 1979 and from 1980 to 1984, the third longest serving Canadian head of government. He is well known for his institutional reforms, patriation of the Canadian Constitution, which secured the country's sovereignty, and official recognition of bilingualism in Canada, but was widely criticised for perceived economic mismanagement and alleged inability to reach compromises with political opponents.