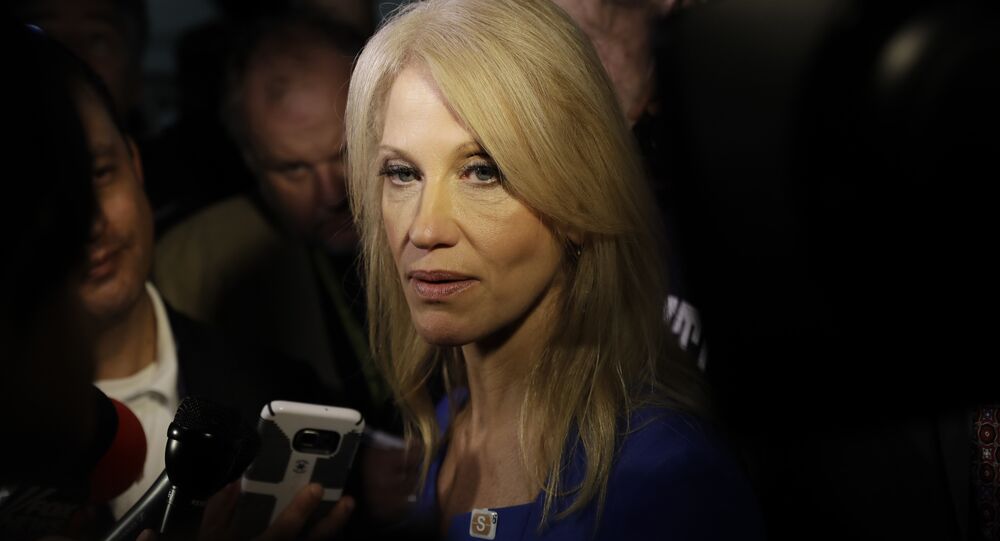 The US Office of Special Counsel (OSC) is recommending that Donald Trump fire White House counselor Kellyanne Conway for repeatedly violating a law that limits political activity by government workers, while the White House spokesman says the agency’s report was “deeply flawed”.

The watchdog agency made its recommendation to remove Conway from the federal office after concluding that Conway violated a US law, known as the Hatch Act, which bars government employees from engaging in political campaign activity.

© REUTERS / Mike Segar
Kellyanne Conway's Husband Mocks Trump With Link to Star Wars' Jar Jar Binks
In a report addressed to the president, the special counsel’s office identified Conway, long a prominent Trump aide, as a “repeat offender” of the Hatch Act who has “shown disregard for the law”.

“Ms Conway’s violations, if left unpunished, would send a message to all federal employees that they need not abide by the Hatch Act’s restrictions. Her actions thus erode the principal foundation of our democratic system: the rule of law,” the report stated.

The special counsel’s office criticized Conway for continuing to disregard the Hatch Act, referencing her recent comments against Joe Biden and her advocacy for and against candidates in the 2017 Alabama special election.

It also accused Conway of having downplayed the significance of the Act, stating in an interview last month: “If you’re trying to silence me through the Hatch Act, it’s not going to work. Let me know when the jail sentence starts.”

“Others, of all political views, have objected to the OSC’s unclear and unevenly applied rules, which have a chilling effect on free speech for all federal employees. Its decisions seem to be influenced by media pressure and liberal organizations – and perhaps OSC should be mindful of its own mandate to act in a fair, impartial, non-political manner, and not misinterpret or weaponize the Hatch Act,” he said.