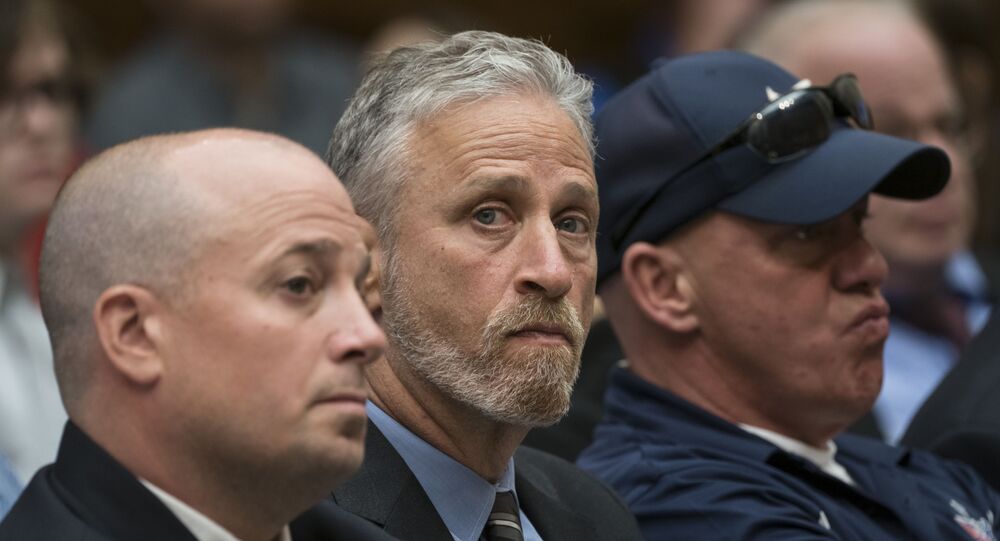 Stewart noted during a House Judiciary Committee hearing on reauthorizing the September 11th Victim Compensation Fund that many lawmakers on the panel did not show up for the hearing, leaving the committee room mostly empty.

“As I sit here today, I can't help but think, what an incredible metaphor this room is for the entire process that getting health care and benefits for 9/11 first responders has come to. Behind me, a filled room of 9/11 first responders, and in front of me, a nearly empty Congress.”

He slammed those absent members of Congress for disrespecting the personal sacrifice that former 9/11 first responders made to appear before them, saying that “it's an embarrassment to the country and it is a stain on this institution.”

© AP Photo / Vahid Salemi
Iran's Revolutionary Guards' Commander Compares US to World Trade Center Building in 9/11 Jibe
Later Stewart urged lawmakers to back up their words with actions on the 9/11 Victims' Compensation Fund and help American heroes who are still suffering today, cited by Fox News.

"That drove me nuts," the comedian said after being asked about the empty seats he saw, noting "They kept saying it's a 'sub-subcommittee.' There's still people on the sub-subcommittee that aren't here.”

"No amount of money is going to end the suffering and the grieving that these men and women have to endure. But they can stop making it worse. They can stop adding uncertainty and stress and financial hardship to the lives of these folks," he added.

The fund is set to expire in 2020, and the special master who runs it previously announced plans to cut payouts by between 50% and 70% to ensure all are paid. The fund paid out $7 billion in damages when it originally operated from 2001 to 2003, was reopened in 2011 and extended for another five years in 2015.