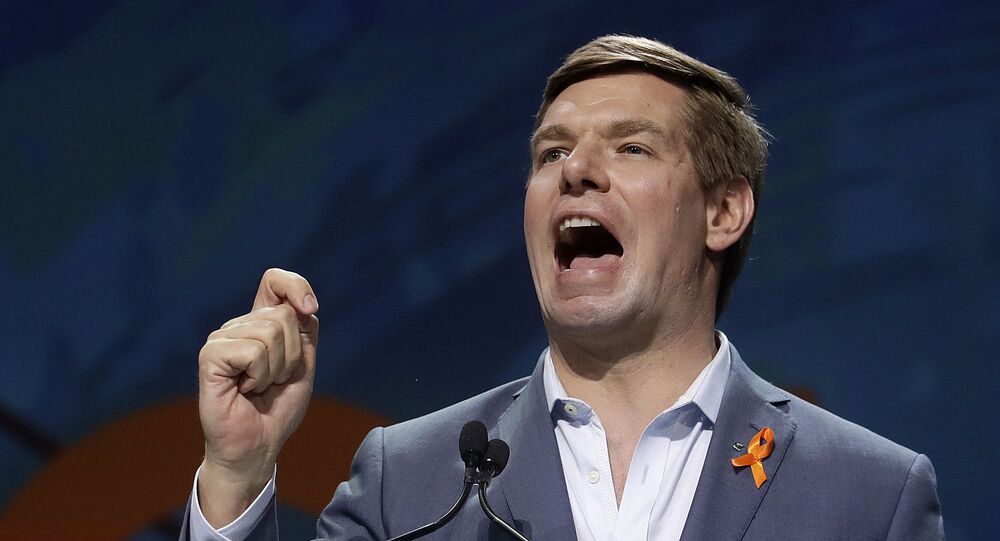 The candidate tried to warm up the audience with a good joke, but listeners were less than impressed.

On Sunday, Democratic Presidential Candidate Eric Swalwell compared candidates from his party to the main characters from “The Avengers” comic book/movie franchise and likened rival Republican party candidates to characters from the “Hunger Games” series.

"To my fellow candidates, I consider us all like ‘The Avengers’,” he said smiling, expecting a reaction of laughter from the audience. “The Republicans in 2016, that was 'The Hunger Games.' We are in this, with your help and support, to save this country we love so much.”

The candidate was met with an awkward and reserved reaction.

Speaking at the Iowa Democratic Party Hall of Fame Forum, the California congressman praised voters for electing the Dem majority to the House in 2018.

“You cut our time in hell in half,” he said. “You gave us a shot to save the country.”

He did not elaborate on which of his fellow Democrats he considers an expy for the self-obsessed narcissist inventor Tony Stark, who is like the Cold War relic brawler Captain America or who represents Thor, 1000-year old guy with a hammer.

In any case, one thing Swalwell, who pledged to ban guns for private citizens should he win, definitely does not share with any of the superheroes is notoriety. According to a CNN/Des Moines/Mediacom Iowa poll released Saturday, of 600 participants, 65 per cent of respondents asked in person and 75 per cent of respondents asked online, said they either “don’t know” or are “not sure”  who Swalwell is.

"I will always be real with you. I will be bold," he said passionately before landing what he thought would be his memorable line, "without the bull."

Democrat presidential candidate Eric Swalwell: “I will be bold without the bull”

Swalwell pauses, appearing to expect applause from the audience

The punch line that was evidently supposed to spark applause landed to deafening silence and some awkward laughter from the audience.

There are 24 Democratic candidates and two Republicans who are running for the presidency in 2020. Sunday's forum was the largest event for the 2020 caucus so far. Around 1,500 activists and 200 media representatives attended, according to the Des Moines Register report.

Self Help Guru In Need of Help? Is War Good for Democratic Candidates?