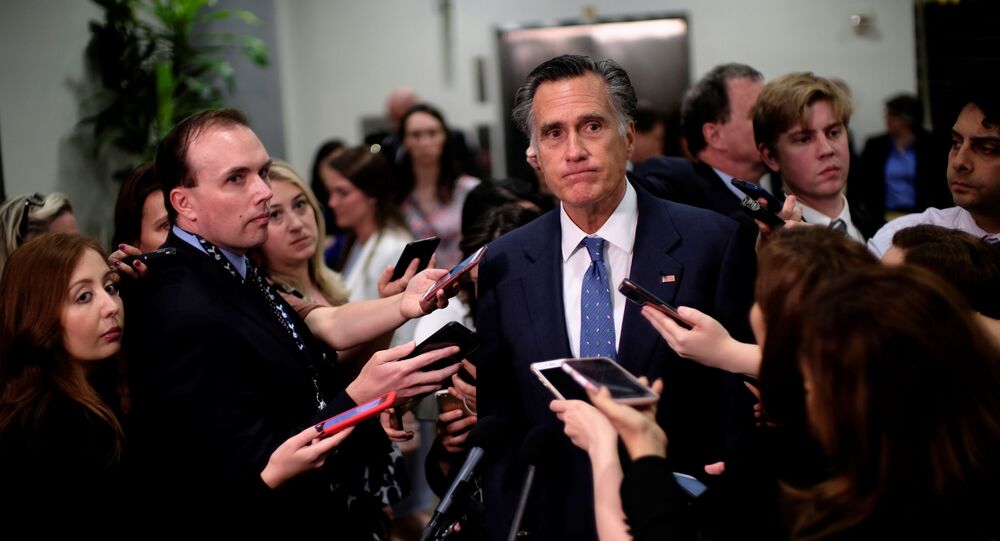 The US president and Romney appear to have complicated relations, with the latter on the one hand calling Trump a "phoney" and a "fraud", while on the other hand supporting some of his decisions, like putting pressure on China.

Republican Senator for Utah Mitt Romney has stated that he might not endorse US President Donald Trump in his 2020 re-election bid, with such endorsements only being "worth a thimble of spit". He further added that he is probably not going to endorse any other candidate either.

At the same time, Romney suggested that Trump doesn’t really need his endorsement to win the Republican nomination for 2020, partially due to his successes, but he admitted that this is not guaranteed.

"The attitude here has got to be the same as across the country, which is the president will surely be the Republican nominee and an incumbent in a growing economy is more likely to win than to lose. But it’s not a sure thing”, Romney said.

Most netizens were left unimpressed by Romney's move, with many of them suggesting that he would change his mind in the end and vote for Trump anyway.

He’s taking the Collins approach to politics. Get all the free publicity by making it seem his mind isn’t made up, then voting along party lines at the end of the day. pic.twitter.com/KyRm5ZuCox

Spoiler alert: he will!

Others lambasted the senator, saying that the US president doesn't need his "pathetic" endorsement.

WHAT A DOUCHE - PATHETIC: Mitt Romney Says He May Not Endorse Trump in 2020 https://t.co/9Cl65BjVi5 via @gatewaypundit

It’s hilarious to think that Mitt Romney thinks Donald J. Trump will need his endorsement to win re-election. WRONG! Mitt Romney has been no better than your typical Washington, DC democrat. SAD! https://t.co/GSHv4gTb9M

The senator from Utah and the US president have not always been on good terms with each other. During the 2016 election campaign, Romney called Trump a "phoney" and a "fraud", also refusing to vote for him. At the same time, following Trump's inauguration, the senator seemingly tried to mend his relations Trump, but still criticised the president on some points, while supporting him on others - like putting economic pressure on China over the alleged trade imbalance.

Romney Looks to be Liberals Favorite US Senator