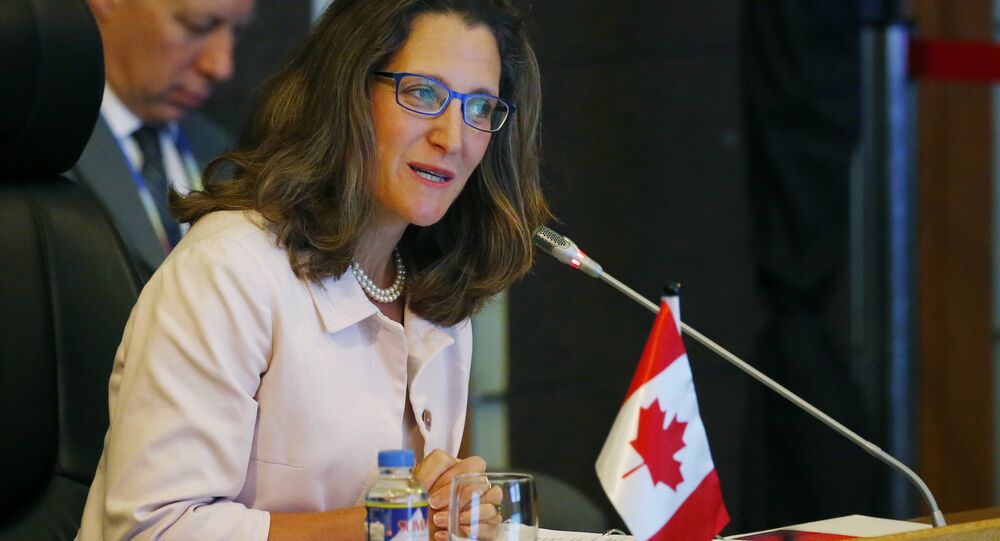 Canadian Foreign Minister Chrystia Freeland said on Friday that Havana will have a role to play in Venezuela's return to democracy although Ottawa and Havana disagree on whether President Nicolas Maduro should stay in office, Reuters reported.

Freeland made her remarks in Toronto after meeting Cuban Foreign Minister Bruno Rodriguez, according to Reuters.

Earlier this week, US Secretary of State Mike Pompeo and Freeland discussed ongoing efforts to support the rebuilding of democracy in Venezuela and also opposition leader Juan Guaido.

The US Department of State spokesperson said Tuesday that Pompeo and Freeland also agreed to continue cooperation towards exerting pressure on Cuba to provide a "democratic and prosperous" future for the Cuban people.

© AFP 2021 / FEDERICO PARRA
Moscow Ready to Send More Defence Experts to Venezuela If Necessary - Foreign Ministry
The United States in recent weeks has stepped up its campaign to oust Venezuelan President Nicolas Maduro and replace him with Guaido, who proclaimed himself the country's interim president.

Maduro called Guaido a puppet of the United States and accused Washington of orchestrating a coup to force regime change in Venezuela and claim the country’s resources.

Guaido has formally asked the US military to intervene in Venezuela and overthrow Maduro. The Trump administration has said the United States will consider "all options" to topple Venezuela's democratically elected president.

China, Russia, Bolivia, Turkey, Cuba, and numerous other countries have voiced their support for the constitutionally-elected Maduro as Venezuela's only legitimate president.