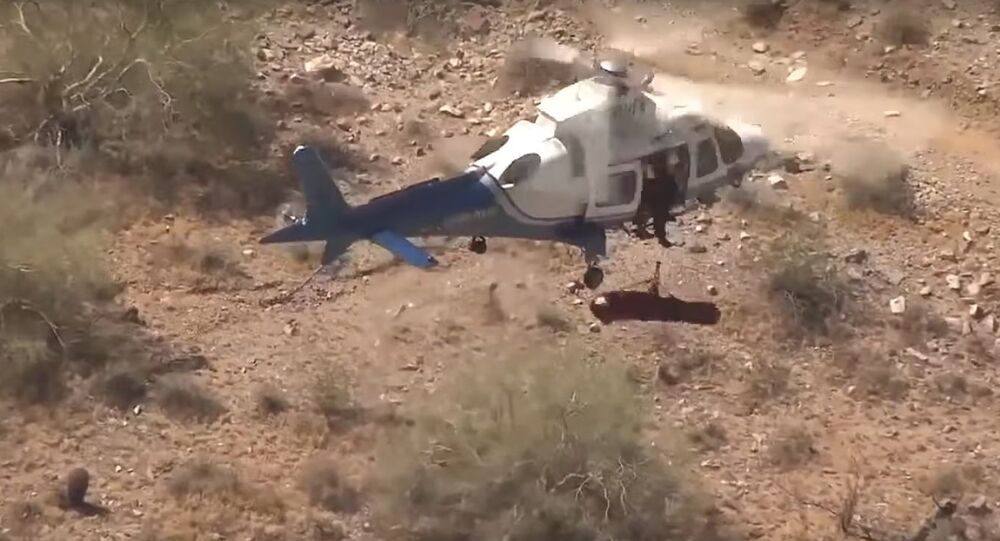 Pilots said that the rescue basket would rotate now and then, but the line, which is designed to prevent it from windmilling, didn’t work this time.

What looked to be a routine rescue operation turned into a nightmarish ride for the injured hiker.

A chopper was scrambled in the early morning of Tuesday to recover a 74-year-old woman from mountains near Phoenix, Arizona.

The rescue team loaded the woman, who reportedly had her head and face injured in a fall, into a basket on a hoist.

But after she was lifted up, the basket started to spin round at an increasing speed. The crew can be seen desperately trying to stop the load from rotating by bringing it up and down.

"Sometimes when we bring the helicopter up from the ground, [the basket] will start to spin", chief pilot Paul Apolinar told a local TV station.

"We have a line attached to the basket that's supposed to prevent that. Today it didn't".

The crew said that after a minute of this dramatic struggle, the woman was finally picked up into the aircraft.

She was transported to a trauma centre in Phoenix for evaluation and was said to feel dizzy and nauseated, but suffered no other ill effects.

To Protect and Style? US Officer Comes to High School Grad’s Rescue

About 250 Migrants Rescued by Moroccan Coast Guard Over Weekend - Reports