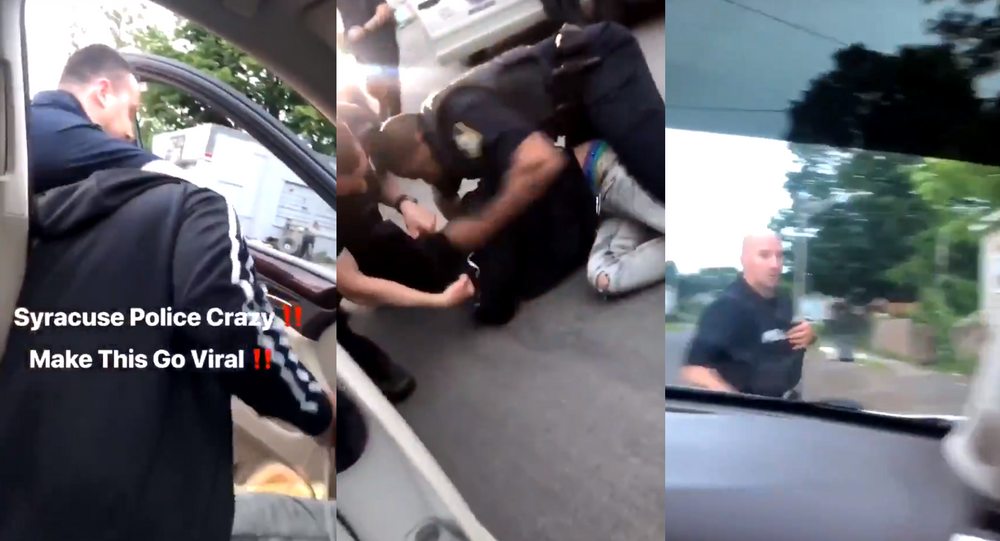 WATCH: US Cops Under Investigation Over Excessive Force Allegations

Several Syracuse Police officers remain on duty as their department begins a routine review into the use of force and alleged misconduct captured on a now-viral video that has amassed hundreds of thousands of views since the weekend.

Social media users are accusing Syracuse Police Department officers of attempting to cover up their unlawful use of force after a series of events at a traffic stop on Friday was caught on a video posted by Twitter user @St_Lu3.

The 33-second clip begins with a disagreement over whether the driver, 23-year-old Shaolin Moore, is required to exit his vehicle. Syracuse Police say the traffic stop was conducted because the car was playing loud music.

Amid the argument, one officer is overheard ordering the driver to "get the f**k out of the car" or get pepper sprayed. Without spraying Moore, an officer then grabs him by his neck, pulling him from the car and onto the pavement.

Cops are seen piling on the driver, delivering a series of punches to his head before one officer rushes to detain the passenger who's recording.

So ya just gonna keep abusing ya power no matter how many incidents we’ve had huh? All for loud music…. pic.twitter.com/ezH1OKXfC7

It's unknown if the passenger was handled with force, as one cop, who is being accused of deliberately obstructing his body camera, seized the man's phone.

The Syracuse Police Department responded to the video Sunday, announcing a routine review was underway.

We have seen the use of force video involving our officers circulating the internet. As with all use of force incidents, the matter is being reviewed.

"Importantly, it occurred immediately following a coordinated police response to Skiddy Park, where individuals were involved in the sale of illegal substances, and an unlawfully possessed handgun was recovered. Officers heard the noise from the vehicle as they were concluding the drug and weapons investigation at the park. The vehicle was stopped a few blocks from the park," Syracuse Police Chief Kenton Buckner noted in a Monday statement regarding the incident.

Syracuse.com reports 188 grams of marijuana were discovered at the nearby scene.

Though Moore was not in possession of any contraband, the 23-year-old was charged with resisting arrest and "sound reproduction" for the loud music — a non-criminal offense that usually ends in a ticket and a day in court.

Social media users, including Syracuse activist Nitch Jones, assert the entire situation should have simply ended in a citation for disturbing the peace.

"Wait, did I mention once both young men were removed from the LEGAL registered and insured car — no drugs, alcohol, weapons, etc., were found?!" Jones highlighted on Sunday.

While the department's investigation remains underway, netizens appear to have already seen enough to make their own determinations.

“Reviewed” it is evident that the officers completely violated the 4th amendment there was no probable cause to arrest. The four police officers need to be terminated luckily the cops didn’t draw their gun. This is atrocious police work and it exemplifies your department

These officers violated citizens and strategically did things (put down phone, covered badges, etc) to be HIDDEN and COVER THIS UP. there is nothing to “review” just terminate your poor officers and fix your department as a whole.

We're tired of videos and incidents being "reviewed".
You can see what we see. Your eyes work like ours. You chose to turn them away in favor of protecting each other rather than the citizens of this country.

I don’t understand why they have any right to remove the other man’s phone from him in addition to the rest of it.
Come on SPD, surely you can do better than that.

that officer literally covered his badge when he ran to grab the camera. they know exactly wtf they be doing.

We already know how this ends.

No wrongdoing because they were trained that way.

Preschool Pursuit: Four-Year-Old and Her Chihuahua Attempt to Evade US Cops