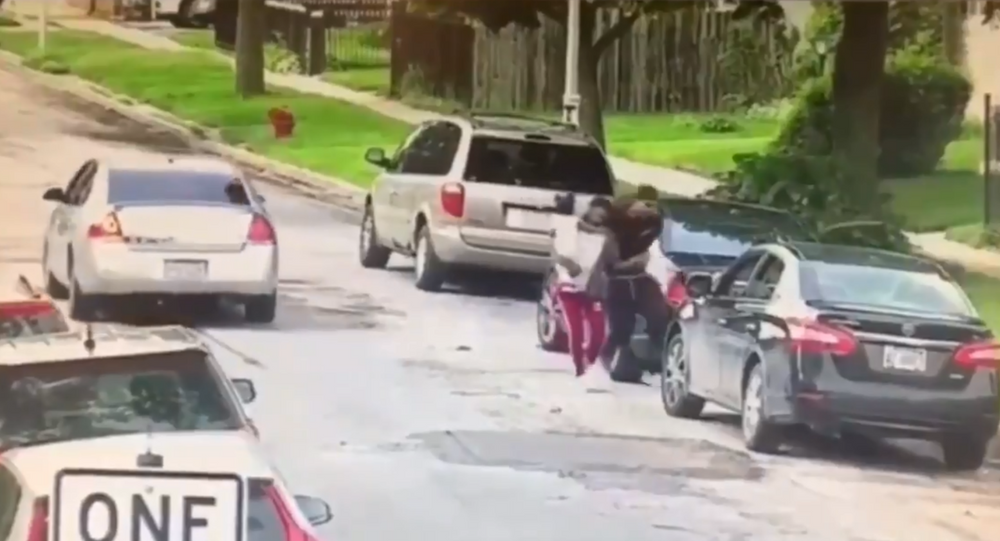 Hill, a 24-year-old resident of the Chicago area, was shot and killed last Tuesday as she stood next to two individuals near parked cars with her 1-year-old daughter in her arms. The leaked surveillance video shows a car slowly approach the scene before shots are fired, which sends Hill running for cover behind a nearby vehicle.

The remainder of the leaked recording shows the mother hiding behind a car, using her body to shield the toddler as bullets continue to be fired. Hill, who was shot in the torso during the first round of bullets, remains slumped on the ground near her daughter for several moments before she's whisked away from the scene.

​Two individuals, one of whom was originally seen standing with Hill prior to the drive-by shooting, are seen assisting in transporting the injured mother. The footage cuts off with Hill being driven away from the scene as a third person takes Hill's child into their care. Hill later died of her injuries.

Jacob Jones, Hill's partner, was one of the people with Hill when the shooting occurred. He told local news station CBS 2 Chicago that he instructed Hill to take cover the moment he spotted the car slowly approaching them. "I was talking to her when they pulled up on the side of my car and opened fire," he said.

Two Illinois men, identified as 39-year-old Michael Washington and 23-year-old Eric Adams, were apprehended later that day and have since been charged in connection to Hill's death. The pair, who are the individuals seen in the leaked surveillance footage, have each been charged with first degree murder.

​Larry Jones, Jacob's grandfather, told the station that he wants the violence in the area to stop.

"The hatred has got to go. The people that did this, they are still going to continue to do violence. What is that going to do? We're supposed to embrace each other," he stressed.

© CC0
At Least Six Shot at Family Gathering in Chicago

Now, with the case going before a criminal court, officials are growing increasingly concerned over the unauthorized video release. Irv Miller, a legal analyst for CBS 2, told the station that the leak could force the trial to be relocated.

"By having this leaked, to have the public see it now could result in problems later on in the trial because jurors, and we're all potential jurors, can't be exposed to things like this prior to the trial," Miller said.

Anthony Guglielmi, chief communications officer for the Chicago Police, said in a statement that the department is taking the release "very seriously," and that officials are working to determine how it was leaked in the first place. CBS 2's analyst indicated that whoever leaked the video could face also face charges for the violation.

Lightfoot Wins in Chicago, Will Victory Resonate Across Democratic Landscape?