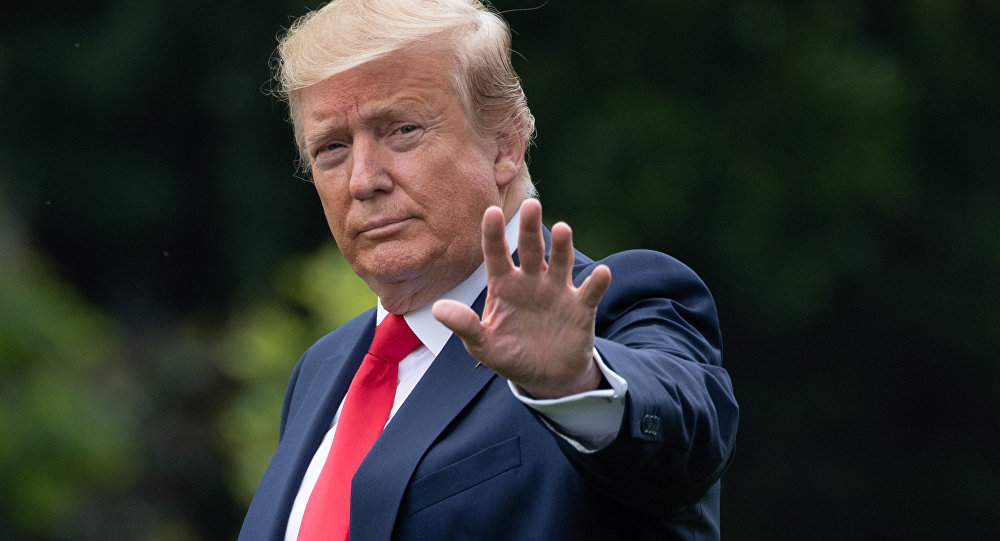 Earlier on Sunday, The Washington Post reported that during a private meeting with a group of Jewish leaders in New York, Secretary of State Mike Pompeo had cast doubt on the administration's long-awaited Middle East peace plan.

Speaking to reporters on Sunday as he prepared to fly to Europe, US President Donald Trump said that Israel ought to “get their act together” after Prime Minister Benjamin Netanyahu was unable to form a new governing coalition and a second election was set for later this year.

“I mean, Bibi got elected, and now all of a sudden they’re going to have to go through the process again until September?” Trump queried.

“That’s ridiculous. So we’re not happy about that”, said Trump, as he referred to the current political situation in Israel as “all messed up”.

The US President also noted that Secretary of State Mike Pompeo may be right in casting doubt on the administration's long-awaited Middle East peace plan.

“Look, we’re doing our best to help the Middle East to get a peace plan, and he [Pompeo] may be right. I mean, most people would say that,” Trump told reporters Sunday.

“But if we can get a Mid-East peace plan that would be good. And when Mike says that, I understand when he says that, because most people think it can’t be done. I think it probably can. But as I say often, we’ll see what happens.”

© AP Photo / Susan Walsh
Pompeo Admits Trump’s Middle East 'Deal of the Century' Could Fail - Reports
Earlier on Sunday The Washington Post reported that during a closed-door meeting with a group of Jewish leaders in New York, Mike Pompeo said “one might argue” that the plan is “unexecutable” and it might not “gain traction”.

“It may be rejected. Could be in the end, folks will say, ‘It’s not particularly original, it doesn’t particularly work for me', that is, ‘It’s got two good things and nine bad things, I’m out’, ” the US Secretary of State was heard saying in an audio recording of the private meeting obtained by The Washington Post.

“The big question is can we get enough space that we can have a real conversation about how to build this out,” Pompeo said.

The Trump administration has been promising to deliver a groundbreaking proposal that would lay the foundation for lasting peace between Israelis, Palestinians and other stakeholders in the Middle East.

Earlier this year, White House senior adviser Jared Kushner had intimated it could be rolled out in June after reelected Israeli Prime Minister Benjamin Netanyahu had formed a governing coalition.

Yet last week the Knesset voted to dissolve, throwing a spanner in the works and forcing Israeli Prime Minister Netinyaho to stand for election for a second time this year against the backdrop of corruption charges against him.

US President Donald Trump was speaking to reporters on Sunday as he prepared to fly to Europe.

Trump has a two-day visit to Britain that includes meeting with the royal family, a state dinner and talks with outgoing Prime Minister Theresa May.

His visit comes as the UK is in the midst of political turmoil, after May announced last month she would be resigning after failing to complete Britain's exit from the European Union – something that her successor will have to contend with.

Trump has already publicly backed the former Foreign Minister Boris Johnson, and told reporters late Sunday he may meet with Johnson and pro-Brexit politician Nigel Farage while in London.

Donald Trump's trip will also include D-Day commemoration ceremonies in both Britain and France, and a stop in Ireland.