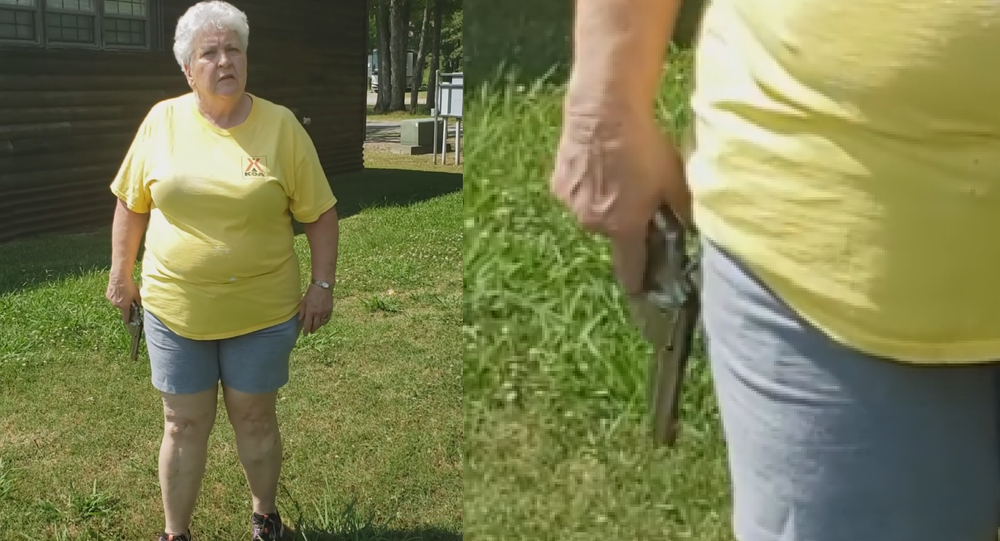 A Mississippi campground worker has been fired after a viral video depicted the elderly employee brandishing a weapon at an unarmed couple and their dog while ordering them to vacate the property.

This past Memorial Day weekend, Jessica and Franklin Richardson and their two-year-old dog ventured to a campground located on Oktibbeha County Lake in Starkville, Mississippi, for a picnic.

Before the young couple could sit down and enjoy their food, a truck driven by an elderly woman in a "Kampgrounds of America" t-shirt pulled up near them and their pooch.

"She jumped out, and the gun was pointed at me, my husband, and our dog. It was just pointing at us. One finger was on the trigger, and one finger was on the lever of the revolver," Jessica Richardson told Mississippi's WCBI, recounting the series of events that led up to the now-viral video that has amassed more than 1.1 million views on Facebook.

In the clip, uploaded Sunday afternoon, the woman is seen brandishing her revolver as she circles the couple. Jessica informs the woman that she and her husband didn't know they needed to inform campground employees about their picnic, and that pulling the gun wasn't necessary. Not denying Jessica's account, the woman replies, saying, "Well I'm just telling you, you need to leave because it's under private ownership. Y'all just can't be out here." She then puts the gun away.

Since the incident, Kampgrounds of America Inc. (KOA), which owns the site in question, has issued an apology for their employee's actions and the "traumatic experience."

However, some commenters were not happy with the apology issued by the company, which operates over 500 locations in the US and Canada. Facebook user Mary Stockinger noted that the woman's husband was also an employee of the company, and both were residents on the property as well.

"If her husband continues employment does that mean they will both continue to reside there? Who will ensure safety for campers if she is still on the grounds?" Stockinger questioned.

Making matters worse, the couple spoke to the geriatric gun wielder's husband on their way out, and he confirmed they were welcome to walk around.

"The first thing he says is ‘Oh, you don't need a reservation for the lake.' Then she pulls up flying, hops out the car, then proceeded to yell at my wife, ‘Get in the car, you need to get back in the car,' just cussing her out and she's not even saying anything," Franklin, a US Army National Guard veteran, told WCBI.

KOA issued a follow-up comment on Facebook, saying they "can confirm that both employees have been terminated," although it's unclear if that means they will remain residents of the campground.