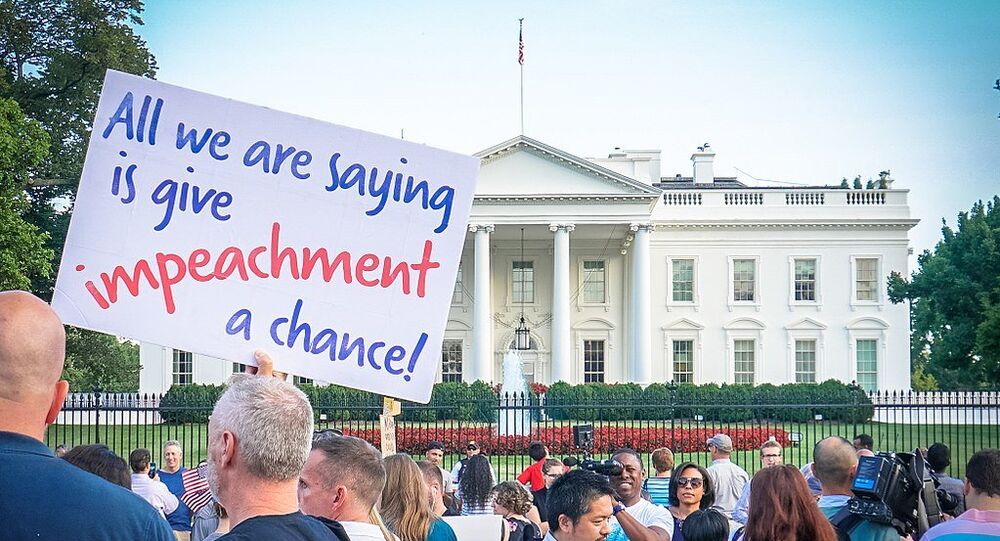 Following former special counsel Robert Mueller’s comments on Wednesday, Democrats are doubling down on their calls for impeaching US President Donald Trump, based on their interpretation of Mueller’s words.

In what became his final words as special counsel before resigning, Mueller spoke at the US Department of Justice offices in Washington, DC, about the results of the two-year investigation into alleged collusion between Trump's 2016 election campaign and the Russian government. The report, delivered last month, found no evidence of collusion, but it remained neutral on the question of whether or not Trump obstructed justice by interfering with the investigation.

Mueller attempted to defuse much of the last month's Beltway drama by explaining exactly why his investigation concluded what it did, and did not suggest specific courses of action. However, in those words — or rather in between them — Democrats found new kindling for their battle to impeach the president.

"The order appointing me special counsel authorized us to investigate actions that could obstruct the investigation," Mueller said Wednesday, noting that "if we had had confidence that the president clearly did not commit a crime, we would have said so. We did not, however, make a determination as to whether the president did commit a crime."

Mueller noted that it was "long standing department policy" for the DOJ that "a president cannot be charged with a federal crime while he is in office. That is unconstitutional… it would be unfair to potentially accuse somebody of a crime when there can be no court resolution of the actual charge."

He further noted that "the Constitution requires a process other than the criminal justice system to formally accuse a sitting president of wrongdoing."

That, for Democrats, has become a Bat Signal, summoning them to rally for new articles of impeachment against Trump for this supposed obstruction of justice.

​"Mueller is playing a game of Taboo with Congress," wrote New York congresswoman Alexandria Ocasio-Cortez, referring to the party game in which one player can't say the word others are trying to guess. "His word is ‘impeach.'"

Mueller is playing a game of Taboo with Congress.

​Likewise, House Judiciary Committee chair Jerry Nadler, a key opponent of Trump's and a leading paladin of the Democratic crusade against the president who recently considered subpoenaing Mueller to testify, said in a statement that "given that Special Counsel Mueller was unable to pursue criminal charges against the president, it falls to Congress to respond to the crimes, lies and other wrongdoing of President Trump — and we will do so."

Democrats were joined by some Republicans, too, like Michigan Rep. Justin Amash, who broke ranks recently to call for Trump's impeachment.

The ball is in our court, Congress. https://t.co/idpQo1xItH

​In a statement following Mueller's remarks, House Speaker Nancy Pelosi (D-CA) repudiated the DOJ's position, saying "no one is above the law — not even the president."

© AP Photo / John Locher
Trump Addresses His 'Haters', Vows to Head to US Supreme Court if Dems Try to Impeach Him

However, later on Wednesday, Pelosi seemed to display more of the lethargy for pursuing an actual impeachment case that she's shown in recent months.

"Nothing is off the table," Pelosi, said at an event in San Francisco. "What we do want to make is such a compelling case, such an iron-clad case, that even the Republican Senate, which at the time seems to be not an objective jury, will be convinced of the path that we have to take as a country."

"I think it would be disposed of very quickly. If it's based on the Mueller report, or anything like that, it would be quickly disposed of," Senate Judiciary Committee Chair Lindsey Graham said Wednesday.

A sitting US president has never been convicted during impeachment proceedings before. President Andrew Johnson, who took over after Abraham Lincoln was assassinated in 1865, narrowly missed a conviction by a single vote, and Richard Nixon retired before what many considered a likely conviction could be delivered. President Bill Clinton was acquitted on the charge of obstruction of justice, but the Senate was tied 50-50 as to whether or not he lied to Congress during the investigation.